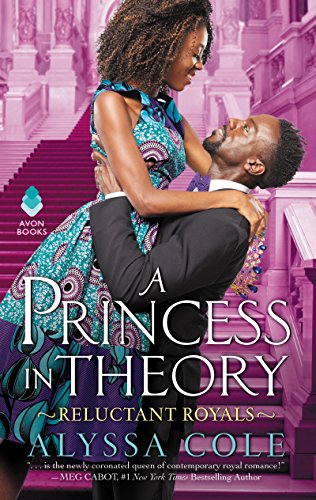 A Princess in Theory
by Alyssa Cole

From acclaimed author Alyssa Cole comes the tale of a city Cinderella and her Prince Charming in disguise .

A Princess in Theory Summary

A Princess in Theory: Reluctant Royals by Alyssa Cole

From acclaimed author Alyssa Cole comes the tale of a city Cinderella and her Prince Charming in disguise . . .

Between grad school and multiple jobs, Naledi Smith doesn't have time for fairy tales...or patience for the constant e-mails claiming she's betrothed to an African prince. Sure. Right. Delete! As a former foster kid, she's learned that the only things she can depend on are herself and the scientific method, and a silly e-mail won't convince her otherwise.

Prince Thabiso is the sole heir to the throne of Thesolo, shouldering the hopes of his parents and his people. At the top of their list? His marriage. Ever dutiful, he tracks down his missing betrothed. When Naledi mistakes the prince for a pauper, Thabiso can't resist the chance to experience life-and love-without the burden of his crown.

The chemistry between them is instant and irresistible, and flirty friendship quickly evolves into passionate nights. But when the truth is revealed, can a princess in theory become a princess ever after?

A Princess in Theory Reviews

"Alyssa Cole is the newly coronated queen of contemporary royal romance! A Princess in Theory is delicious fun... a smart, funny heroine; a sweetly sexy prince; swoon-worthy romance; and an epic happily-ever-after. Long live the queen!" -- Meg Cabot, #1 New York Times bestselling author of The Princess Diaries
"A delightful and sexy take on love between a suave African prince and a nerdy epidemiology student." -- Kirkus Reviews (starred review)
"Attention-grabbing from page one, this first book in the Reluctant Royals series will absolutely warm your heart. A Princess in Theory is a delightful love story that introduces a princess - with attitude! - who readers will enjoy rooting for. Naledi is skeptical about modern royalty, but her ambition and tough demeanor shine. Cultural differences aside, this is a simple and heartfelt story to be savored." -- RT Book Reviews (4 1/2 stars- TOP PICK)
"a funny, fast-moving, smart-alecky romance... A PRINCESS IN THEORY is pure fun. It will have you laughing, cringing and hooked from the start!" -- Romance Junkies
"the best new romance I've read in a while..." -- New York Times Book Review
"This is a fun, fanciful romance perfect for readers dreaming of royal weddings." -- BookPage
"In Cole's world, royalty and romance go hand in hand with compassion, open-heartedness, and intelligence, as well as a clear-eyed sense of real-world politics. A Princess in Theory is a fairy tale, yes, but one consistently grounded in reality, which makes the happily-ever-after all the more satisfying." -- Entertainment Weekly
"This book was a lot of fun, sexy, with a compelling story. I really enjoyed the romance as it developed between Ledi and Thabioso, both interesting characters together and as individuals. Lots of erotic tension and a deeply satisfying ending. Definitely dive into this one." -- Roxane Gay

Alyssa Cole is an award-winning author of historical, contemporary, and sci-fi romance. Her contemporary rom-com A Princess in Theory was one of the New York Times' 100 Notable Books of 2018, and her books have received critical acclaim from Library Journal, BuzzFeed, Kirkus, Booklist, Jezebel, Vulture, Book Riot, Entertainment Weekly, and various other outlets. When she's not working, she can usually be found watching anime or wrangling her many pets.

GOR009365613
A Princess in Theory: Reluctant Royals by Alyssa Cole
Alyssa Cole
Used - Very Good
Paperback
HarperCollins Publishers Inc
2018-03-07
384
0062685546
9780062685544
N/A
Book picture is for illustrative purposes only, actual binding, cover or edition may vary.
This is a used book - there is no escaping the fact it has been read by someone else and it will show signs of wear and previous use. Overall we expect it to be in very good condition, but if you are not entirely satisfied please get in touch with us.