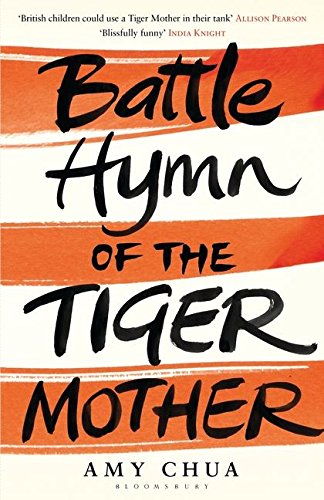 Battle Hymn of the Tiger Mother
by Amy Chua

Used Price
$11.39
Free Shipping in the US
Witty, entertaining and provocative, this is a unique and important memoir that will transform your perspective of parenting forever
Reviews:
Trustpilot
Very Good

Battle Hymn of the Tiger Mother by Amy Chua

A lot of people wonder how Chinese parents raise such stereotypically successful kids. They wonder what Chinese parents do to produce so many math whizzes and music prodigies, what it's like inside the family, and whether they could do it too. Well, I can tell them, because I've done it... Amy Chua's daughters, Sophia and Louisa (Lulu) were polite, interesting and helpful, they had perfect school marks and exceptional musical abilities. The Chinese-parenting model certainly seemed to produce results. But what happens when you do not tolerate disobedience and are confronted by a screaming child who would sooner freeze outside in the cold than be forced to play the piano? Battle Hymn of the Tiger Mother is a story about a mother, two daughters, and two dogs. It was supposed to be a story of how Chinese parents are better at raising kids than Western ones. But instead, it's about a bitter clash of cultures, a fleeting taste of glory, and how you can be humbled by a thirteen-year-old. Witty, entertaining and provocative, this is a unique and important book that will transform your perspective of parenting forever.

""Battle Hymn of the Tiger Mother" is the book we've all been waiting for - a candid, provocative, poignant and vicarious journey through the Chinese- American family culture. It will leave you breathless with its bluntness and emotion. Amy Chua is a Tiger Mother, a greatly gifted law professor and, ultimately, an honest, loving woman with a lot to say."
-Tom Brokaw
"This is one outrageous book, partly thanks to Amy Chua's writing style - Chua is pugnacious and blunt, with an unerring nose for the absurd ...The cultural divide Chua so brilliantly captures is one we stand to witness more and more in our globalized age, after all; and what with Asia and Asian achievement looming ever larger in the American imagination, the issues inherent in "Battle Hymn" are as important as they are entertaining... I was riveted by this book"
-Gish Jen, "The Boston Globe"
"Amy Chua's "Battle Hymn of the Tiger Mother" did more than speak to me. It screamed, shouted and lecture

Amy Chua is the John M. Duff Professor of Law at Yale Law School. Her first book, World on Fire: How Exporting Free Market Democracy Breeds Ethnic Hatred and Global Instability, translated into eight languages, was a New York Times bestseller, an Economist Best Book of the Year and one of the Guardian's Top Political Reads of 2003. Her second book, Day of Empire: How Hyperpowers Rise to Global Dominance - and Why They Fall, was a critically acclaimed Foreign Affairs bestseller. Amy Chua has appeared frequently on radio and television and her writing has been published in the New York Times, the Washington Post, the Financial Times, Harvard Business Review and the Wilson Quarterly. She lives with her husband, two daughters and two Samoyeds in New Haven, Connecticut.

GOR002508034
Battle Hymn of the Tiger Mother by Amy Chua
Amy Chua
Used - Very Good
Hardback
Bloomsbury Publishing PLC
2011-01-10
256
1408812673
9781408812679
N/A
Book picture is for illustrative purposes only, actual binding, cover or edition may vary.
This is a used book - there is no escaping the fact it has been read by someone else and it will show signs of wear and previous use. Overall we expect it to be in very good condition, but if you are not entirely satisfied please get in touch with us.