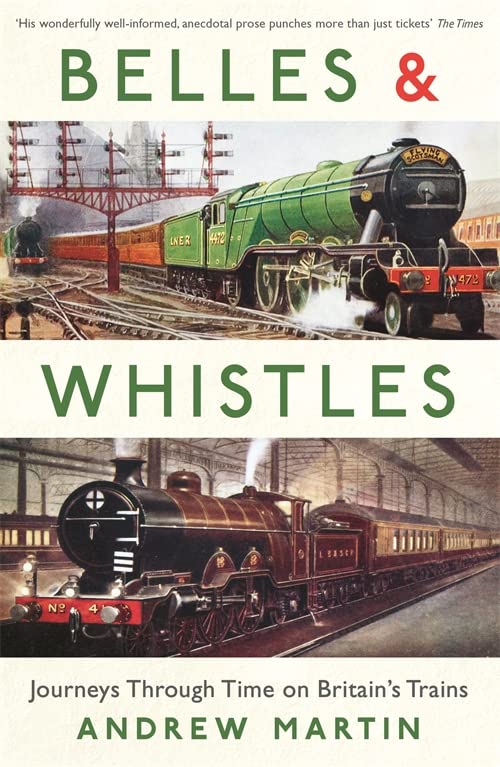 Belles and Whistles
by Andrew Martin

Belles and Whistles: Journeys Through Time on Britain's Trains by Andrew Martin

In the heroic days of rail travel, you could dine on kippers and champagne aboard the Brighton Belle; smoke a post-prandial cigar as the Golden Arrow closed in on Paris, or be shaved by the Flying Scotsman's on-board barber. Everyone from schoolboys to socialites knew of these glamorous 'named trains' and aspired to ride aboard them. In Belles and Whistles, Andrew Martin recreates these famous train journeys by travelling aboard their nearest modern day equivalents. Sometimes their names have survived, even if only as a footnote on a timetable leaflet, but what has usually - if not always - disappeared is the extravagance and luxury. As Martin explains how we got from there to here, evocations of the Golden Age contrast with the starker modern reality: from monogrammed cutlery to stirring sticks, from silence on trains to tannoy announcements, from compartments to airline seating. For those who wonder whatever happened to porters, dining cars, mellow lighting, timetables, luggage in advance, trunk murders, the answers are all here. Martin's five journeys add up to an idiosyncratic history of Britain's railways, combining humour, historical anecdote and reportage from the present and romantic evocations of the past.

Whether describing his trips to Paris or Penzance, Martin is entertaining company, alive to the history of his route ... leaves you with renewed confidence that trains can still be the most civilised way to travel. -- Orlando Bird * FT *
A bittersweet journey of contrasts between romance and reality. Martin's wry, witty commentary punches more than just tickets. -- Iain Finlayson * Saga *
His wonderfully well-informed, anecdotal prose punches more than just tickets -- Iain Finlayson * Times *

Andrew Martin is a journalist and author. His previous book for Profile, Underground, Overground[9781846684784], was a history of the London Underground. He has written for the Evening Standard, Sunday Times, Independent on Sunday, Daily Telegraph and New Statesman among others. His 'Jim Stringer' series of novels based around railways are published by Faber.

GOR007135563
Belles and Whistles: Journeys Through Time on Britain's Trains by Andrew Martin
Andrew Martin
Used - Very Good
Paperback
Profile Books Ltd
2015-07-02
288
1781252130
9781781252130
N/A
Book picture is for illustrative purposes only, actual binding, cover or edition may vary.
This is a used book - there is no escaping the fact it has been read by someone else and it will show signs of wear and previous use. Overall we expect it to be in very good condition, but if you are not entirely satisfied please get in touch with us.