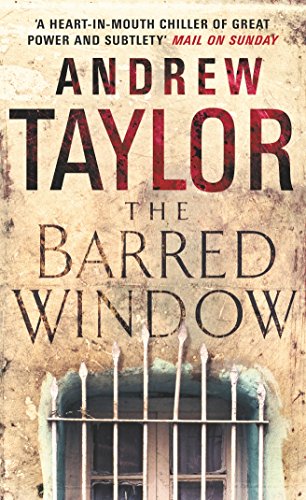 The Barred Window
by Andrew Taylor

In Stock
$11.99
It is 1993 and Thomas Penmarsh has lived in Finisterre, the house by the sea, all his life, he's only 48 and in 1967 he lost everything he valued. However now his controlling mother has died and he is master of the house. When Esmond, his cousin and childhood confidante, comes to live with him Thomas is overjoyed. But is Esmond all that he seems?
Very Good Good
Only 4 left

The Barred Window by Andrew Taylor

It is 1993 and Thomas Penmarsh has lived in Finisterre, the house by the sea, all his life, sleeping each night in the room with the barred window. He's only 48 but has been an old man since one evening in 1967 when he lost everything he valued.

With the death of his controlling mother, Thomas finally becomes master of his own house. When Esmond, his cousin and childhood confidante, comes to live with him Thomas is overjoyed - Esmond always looks after him . . .

But is Esmond all that he seems? And why is he so concerned that Alice wants to come home too? Darling Alice, whom neither have seen since that fateful night twenty-six years ago.

Andrew Taylor is the author of a number of crime novels, including the ground-breaking Roth Trilogy, which was adapted into the acclaimed drama Fallen Angel, and the historical crime novels The Ashes of London, The Silent Boy, and The American Boy, a No.1 Sunday Times bestseller and a 2005 Richard & Judy Book Club Choice.
He has won many awards, including the CWA Ellis Peters Historical Award (the only author to win it three times) and the CWA's prestigious Diamond Dagger.

GOR001227602
The Barred Window by Andrew Taylor
Andrew Taylor
Used - Very Good
Paperback
Penguin Books Ltd
2007-03-29
416
0141027665
9780141027661
N/A
Book picture is for illustrative purposes only, actual binding, cover or edition may vary.
This is a used book - there is no escaping the fact it has been read by someone else and it will show signs of wear and previous use. Overall we expect it to be in very good condition, but if you are not entirely satisfied please get in touch with us.