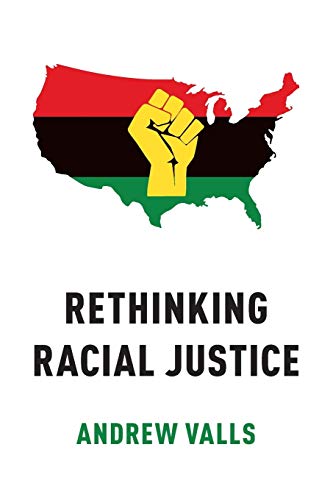 The racial injustice that continues to plague the United States couldn't be a clearer challenge to the country's idea of itself as a liberal and democratic society, where all citizens have a chance at a decent life. Moreover, it raises deep questions about the adequacy of our political ideas, particularly liberal political theory, to guide us out of the quagmire of inequality. So what does justice demand in response? What must a liberal society do to address the legacies of its past, and how should we aim to reconceive liberalism in order to do so? In this book, Andrew Valls considers two solutions, one posed from the political right and one from the left. From the right is the idea that norms of equal treatment require that race be treated as irrelevant-in other words, that public policy and political institutions be race-blind. From the left is the idea that race-conscious policies are temporary, and are justifiable insofar as they promote diversity. This book takes issue with both of these sets of views, and therefore with the constricted ways in which racial justice is debated in the United States today. Valls argues that liberal theory permits, and in some cases requires, race-conscious policies and institutional arrangements in the pursuit of racial equality. In doing so, he aims to do two things: first, to reorient the terms of racial justice and, secondly, to make liberal theory confront its tendency to ignore race in favor of an underspecified commitment to multiculturalism. He argues that the insistence that race-conscious policies be temporary is harmful to the cause of racial justice, defends black-dominated institutions and communities as a viable alternative to integration, and argues against the tendency to subsume claims for racial justice, particularly as they regard African Americans, under more general arguments for diversity.

Andrew Valls's Rethinking Racial Justice is a splendid presentation and defense of the demands of justice as it applies to African Americans. Topics that have distracted attention from essentials-multiculturalism, diversity, identity politics, 'recognition' and ideal theory, for example- are fairly considered and firmly set aside. The focus is on justice and liberal theory. Drawing on this tradition of political philosophy that influenced the authors of the Declaration of Independence and the framers of the United States Constitution, Valls provides an unmatched defense of the justice of Black Reparations and Affirmative Action, a measured case for supporting black institutions, and a convincing critique of the claim that integration is a necessary part of racial justice. * Bernard Boxill, Emeritus Professor, University of North Carolina, Chapel Hill *
The two years since Donald Trump's election should have disabused all but the most delusional of the notion that the United States had become a post-racial society. This urgent text, appearing a half-century after Martin Luther King, Jr.'s assassination, makes a detailed and convincing caseawritten with both passion and exemplary clarityafor the re-centering of racial justice (not an obfuscatory 'diversity') on the national agenda, and its congruence, despite nay-sayers, with fundamental liberal norms and ideals. * Charles W. Mills, Distinguished Professor of Philosophy, CUNY Graduate Center *
Creatively combining liberal political theory, a transitional justice framework, and neglected insights from black radical thought, Andrew Valls unflinchingly addresses the most challenging and controversial issues of racial justice facing African Americans. His analyses are fresh, sophisticated, and rigorous, and his often surprising conclusions break, in productive ways, from liberal orthodoxy. This is an excellent and timely contribution to ongoing debates over what abstract theories of justice mean on the ground. * Tommie Shelby, author of Dark Ghettos: Injustice, Dissent, and Reform *
In Rethinking Racial Justice, Andrew Valls shows how commonplace assumptions about diversity and integration are misplaced. Drawing on ideas from transitional justice, Black nationalism and liberal egalitarianism, Valls presents a compelling case for understanding racial injustice as a singular unfairness, and as something that should not be assimilated to other kinds of injustice. Rethinking Racial Justice resets our national conversation about race, diversity and equality in important ways. * Jeff Spinner-Halev, Kenan Eminent Professor of Political Ethics, University of North Carolina, Chapel Hill *
In this brilliant book, Andrew Valls presents a sharp and accessible analysis of, and argument for, racial justice. Corrective justice to rectify the harms of racial discrimination and oppression against African Americans is at the heart of his analysis, which is applied across a range of topics from debates over monuments to residential and educational integration to criminal justice. Valls reminds us about how demanding liberal theories of justice ought to be and in doing so pushes the boundaries of liberal egalitarian political philosophy. * Ronald R. Sundstrom, author of The Browning of America and the Evasion of Social Justice *
The focus here is on American racial inequality. Valls (Oregon State) focuses on the perpetual plight of African Americans regarding liberty, equality, and justice, all of which ought to be granted to citizens of the US. This is a long-standing problem. It is argued that neither the racial injustices of the past nor present racial injustices have been addressed in any concrete way and that unless a massive shift occurs in American culture, the immediate future does not project to be any different...Though relying on various academic texts to support his arguments, the author has written a clear, accessible text. This is an important, unflinching look at a shameful part of American life, and its pages ought to have a wide audience. * P. Gamsby, Memorial University of Newfoundland *