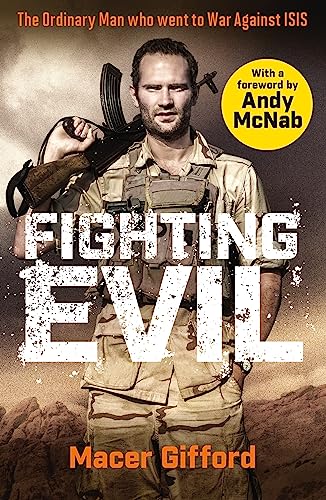 Used Price
$9.69
Free Shipping in the US
A visceral, riveting, no-holds-barred military memoir told from the front line of the war against ISIS.
Reviews:
Trustpilot
Very Good

Fighting Evil: The Ordinary Man who went to War Against ISIS by Andy McNab

A visceral, riveting, no-holds-barred military memoir told from the front line of the war against ISIS with a foreword by Andy McNab.

In the summer of 2014 the world watched in horror as the black flag of ISIS swept all before it. Mosul, the second largest city in Iraq fell, ISIS proclaimed the caliphate and the horror mounted: from the mass murder, rape and enslavement of the Yazidis to the public beheading of journalists by British jihadis. For Macer Gifford it wasn't enough to ask why more wasn't being done, he knew he had to act. So, he left his job in the city, split from his girlfriend and a few weeks later found himself illegally crossing the border into Syria to join the Kurdish YPG in their fight against the savagery of ISIS.

Macer Gifford became one of longest serving British International Volunteers and one of the only few to be promoted to be a Commander in the YPG. He fought alongside the Kurds (and their Syrian Allies) for three long tours of duty from the dawn of the caliphate all the way to its military defeat in the ruins of Raqqa in 2017, sniping at the final deadly wave of suicide bombers as they burst from the rubble. Along the way, he made - and lost - many friends.

This is the only complete account of the war against the Caliphate by the Kurds and the remarkable and often eccentric band of international volunteers who fought alongside them.

A riveting, visceral, no-holds-barred account from the front line of the war against ISIS. Compelling; raw; savage; yet beautifully written, this is a crie de coeur from a defining story of our age, with an international cast like no other. * Damien Lewis, bestselling author of Operation Certain Death, SAS Ghost Patrol etc. *

Andy McNab joined the infantry as a boy soldier. In 1984 he was 'badged' as a member of 22 SAS Regiment and was involved in both covert and overt special operations worldwide. During the Gulf War he commanded Bravo Two Zero, a patrol that, in the words of his commanding officer, 'will remain in regimental history for ever'. Awarded both the Distinguished Conduct Medal (DCM) and Military Medal (MM) during his military career, McNab was the British Army's most highly decorated serving soldier when he finally left the SAS in February 1993. He wrote about his experiences in three books: the phenomenal bestseller Bravo Two Zero, Immediate Action and Seven Troop. He is the author of the bestselling Nick Stone thrillers. Besides his writing work, he lectures to security and intelligence agencies in both the USA and UK. He is a patron of the Help for Heroes campaign. www.andymcnab.co.uk Macer Gifford is a former foreign exchange trader who went to Syria in 2015 to fight with the YPG against the Islamic State terror group. Over his three years with the YPG, he became the most well-known International Volunteer battling ISIS, writing for publications and appearing on radio channels worldwide, while garnering over 45k online followers. A long-time human rights activist, Gifford has previously conducted expeditions into the Congolese rainforest; campaigned against Robert Mugabe in Zimbabwe; and worked with the British Council on the Horn of Africa. He is currently studying for a Masters degree in Security, Peace-building and Diplomacy at Loughborough University, London.

GOR010586442
Fighting Evil: The Ordinary Man who went to War Against ISIS by Andy McNab
Andy McNab
Used - Very Good
Paperback
Orion Publishing Co
2020-05-26
288
1409195708
9781409195702
N/A
Book picture is for illustrative purposes only, actual binding, cover or edition may vary.
This is a used book - there is no escaping the fact it has been read by someone else and it will show signs of wear and previous use. Overall we expect it to be in very good condition, but if you are not entirely satisfied please get in touch with us.