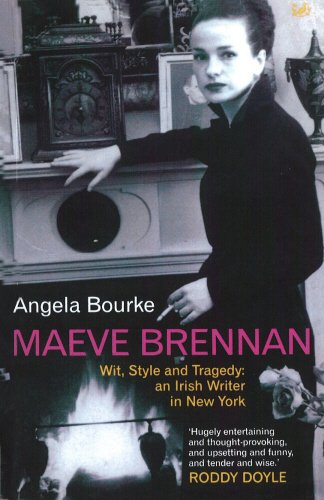 Used Price
$11.39
Free Shipping in the US
Born in Dublin in 1917 to politically active parents, Maeve Brennan's childhood in Ireland was moulded by the cultural ideologies of nationalism and lit by the creative energy of the Abbey and Gate theatres.
Reviews:
Trustpilot
Very Good

Born in Dublin in 1917 to politically active parents, Maeve Brennan's childhood in Ireland was moulded by the cultural ideologies of nationalism and lit by the creative energy of the Abbey and Gate theatres. She was seventeen when her father was appointed to the Irish Legation in Washington DC, where he was Irish Minister throughout World War II. Maeve wrote fashion copy at Harper's Bazaar until 1949, when William Shawn invited her to join The New Yorker. Tiny, impeccably groomed, and devastatingly witty, in William Maxwell's words, 'to be around her was to see style being invented'. Her richly textured fiction criticism and 'Talk of the Town' pieces, published in the 1950s and '60s, during The New Yorker's most influential period, offer unsparing portraits of the Ireland she had left and the America she inhabited. As this richly researched and wide-ranging book makes clear, Maeve Brennan's effect on the people who met her, her eye for human behaviour, clothing and domestic settings, her memory of home and her courageous life as a woman alone in metropolitan America make her an icon of the twentieth century.

"'A biography to savour and treasure. Angela Bourke is as expert on Irish history as she is on the cultural ambience of the male-dominated New Yorker. Her book has wit, sensitivity and insight; everything that Brennan, herself, would have approved of.'" * Frances Spalding, Daily Mail *
"'Hugely entertaining and thought-provoking, and upsetting and funny, and tender and wise.'" * Roddy Doyle *
"'A labour of love and a profound study of literary life in 20th-century America.'" * Roy Foster, Financial Times *
"'This book needed to be written and Angela Bourke was the perfect author...meticulously researched, detailed and beautifully written.'" * Evening Herald *
"'Bourke merges beautifully the small milestones in the young Maeve's life with the large public events that were going around her...She deftly builds up a tapestry-like texture of Maeve Brennan's young life, which the author herself so successfully mined in her fiction.'" * Irish Times *

Angela Bourke is the author of The Burning of Bridget Cleary: A True Story (winner of several awards, including the Irish Times Literature Prize for Irish Non-Fiction), and By Salt Water. Born in Dublin, where she still lives, she has spent long periods in the USA, and has held visiting academic positions at Harvard University, Boston College and the University of Minnesota. A leading scholar in interdisciplinary Irish Studies, Angela Bourke writes in Irish and English, and makes frequent appearances on television and radio. She is Senior Lecturer in Irish at University College Dublin, The National University of Ireland, Dublin.

GOR010333446
Maeve Brennan: Wit, Style and Tragedy: An Irish Writer in New York by Angela Bourke
Angela Bourke
Used - Very Good
Paperback
Vintage Publishing
2011-04-19
352
184595176X
9781845951764
N/A
Book picture is for illustrative purposes only, actual binding, cover or edition may vary.
This is a used book - there is no escaping the fact it has been read by someone else and it will show signs of wear and previous use. Overall we expect it to be in very good condition, but if you are not entirely satisfied please get in touch with us.