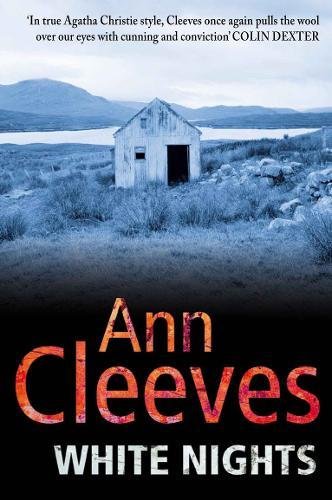 When Shetland detective Jimmy Perez finds a body in a hut used by fishermen it seems to be a straightforward case of suicide. He recognizes the victim - a stranger with amnesia who had disrupted a local party the night before his death.

Yet this is no desperate act of anguish, but the work of a cold and calculating killer.

As Perez investigates, he finds himself mired in the hidden secrets of the small Biddista community. Then another body is found.

Perez knows he must break the cycle before another death occurs. But this is a crazy time of year when night blurs into day and nothing is quite as it seems . . .

Unanimous Acclaim for the Shetland Island Thrillers
"A riveting read."
- Val McDermid, author of "The Grave Tattoo
""Chilling . . . enough to freeze the blood."
- Marilyn Stasio, "The New York Times Book Review
""A pleasure to read. Interesting characters, great setting, intriguing plot. . . . And the bonus when we ?nish it is that we know we've got two more to look forward to."
- Reginald Hill, author of "Death Comes for the Fat Man"
"Taut, atmospheric . . .will keep readers guessing until the last page."
- "Publishers Weekly" (starred review)
"A most satisfying mystery. Jimmy Perez is a fine creation."
- Peter Robinson, author of "Friend of the Devil"
"In true Christie fashion, Cleeves once more pulls the wool over our eyes with cunning and conviction."
- Colin Dexter, author of "The Remorseful Day"
"Deserves the top crime writer's prize in the United States this year. Don't miss this standout."
- "Rocky Mountain News
""Vivid...acute... With skillfully drawn characters, an engaging cop and a poignant story of past deeds resonating in the present, "White Nights" lays bare the dark secrets and long nights of the spirit."
- "Richmond"" Times"

Ann Cleeves worked as a probation officer, bird observatory cook and auxiliary coastguard before she started writing. She now promotes reading as Harrogate Crime-Writing Festival's reader in residence, and is also a member of 'Murder Squad', working with other northern writers to promote crime fiction. In 2006 Ann was awarded the Duncan Lawrie Dagger for Best Crime Novel, for Raven Black. Some of her other novels include the popular Vera Stanhope series, The Crow Trap, Telling Tales, Hidden Depths, Silent Voices, The Glass Room, Harbour Street and The Moth Catcher. Ann lives in North Tyneside.

GOR009869299
White Nights by Ann Cleeves
Ann Cleeves
Used - Like New
Paperback
Pan Macmillan
2009-06-05
416
0330448250
9780330448253
N/A
Book picture is for illustrative purposes only, actual binding, cover or edition may vary.
This is a used book - there is no escaping the fact it has been read by someone else and it will show signs of wear and previous use. Overall we expect it to be in very good condition, but if you are not entirely satisfied please get in touch with us.