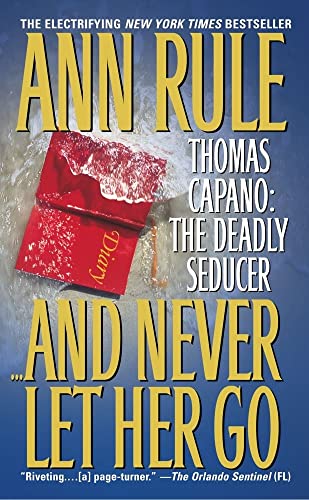 And Never Let Her Go
by Ann Rule

In Stock
$8.69
The bestselling true-crime writer dishes out the inside story on the murder of Anne Marie Fahey, a secretary to the governor of Delaware, at the hands of Tom Capano, the widely admired attorney and political adviser with whom Anne had a secret affair. This title hit the "New York Times" bestseller list and went back to press three times before publication.
Very Good
Only 3 left

And Never Let Her Go Summary

And Never Let Her Go by Ann Rule

The shattering crime story that shocked the nation: the Thomas Capano murder case
On a June evening in 1996, 30-year-old Anne Marie Fahey, secretary to the governor of Delaware, vanished without a trace following a restaurant rendezvous with her secret lover of more than two years: Thomas Capano. One of Wilmington's most prominent and respected figures, a millionaire attorney and former state prosecutor, "Tommy" was a charming, softspoken family man. But in the weeks and months that followed Fahey's disappearance, investigators would gradually uncover the shocking truth: Capano was a steely manipulator driven by power and greed -- and capable of brutal murder. In a riveting narrative expertly documented by probing interviews, diary entries, and e-mail correspondence, and with superb insight into the twisted motivations of a killer, Ann Rule chronicles a real-life drama of Shakespearian proportions: ambitions fall, love turns to obsession, family names are tainted, the facade of success crumbles -- and a beautiful but vulnerable young woman pays the ultimate price in a convoluted and deadly relationship.

And Never Let Her Go Reviews

The Orlando Sentinel (FL) Riveting....[a] page-turner.
More Rule peels away the layers of deception to reveal a monster who lived a secret life for decades.
The Washington Post [Rule] tell[s] the sad story with authority, flair, and pace.
Publishers Weekly (starred review) Most people like to think they recognize evil when they see it. But as this gripping story of a 1996 Delaware murder makes clear, most people are wrong. Much more than the profile of a handsome, insidious killer and the young woman he murdered, ...And Never Let Her Go is also the story of three close-knit families and how thirty-year-old Anne Marie Fahey's death strengthened or destroyed them....In Rule's capable hands [this is] the raw matierial for a modern-day tragedy.
People [A] truly creepy true-crime story....This portrait of an evil prince needs no embellishment.
The State (Columbia, SC) Compelling...Ann Rule leaves nary a stone unturned in her examination of the Fahey case....One feels as if one knows the victim and her slayer.
The Plain Dealer (Cleveland) In her selection and treatment of the Fahey murder, [Rule] might have created her masterpiece.
The Orlando Sentinel (FL) Even crime buffs who followed the case closely are bound to gain new insights....The courtroom scenes of Capano are especially compelling.
Booklist [A] compassionate portrayal of the victim and a chilling portrayal of her killer....This is a true page-turner, a compelling rendering of a crime committed by a deeply troubled, egotistical sociopath.
Kirkus Reviews The stunning New York Times bestseller from "America's best true-crime writer".

Ann Rule wrote thirty-five New York Times bestsellers, all of them still in print. Her first bestseller was The Stranger Beside Me, about her personal relationship with infamous serial killer Ted Bundy. A former Seattle police officer, she used her firsthand expertise in all her books. For more than three decades, she was a powerful advocate for victims of violent crime. She lived near Seattle and died in 2015.