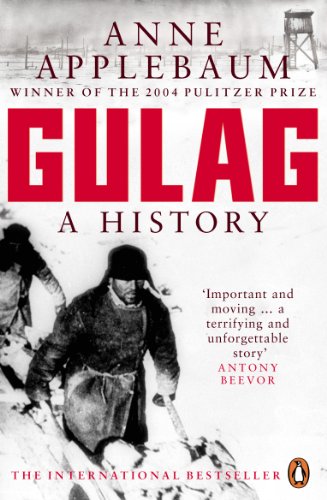 In Stock
$11.99
Reveals one of the greatest horrors of the 20th century: the system of Soviet camps that are responsible for the deaths of countless millions. This work presents history of the camp: from its origins under the tsars, to its colossal expansion under Stalin's reign of terror, its zenith in the late 1940s and eventual collapse in the era of glasnost.
Very Good
11 in stock

Gulag: A History of the Soviet Camps by Anne Applebaum

This landmark book uncovers for the first time in detail one of the greatest horrors of the twentieth century: the vast system of Soviet camps that were responsible for the deaths of countless millions.

Gulag is the only major history in any language to draw together the mass of memoirs and writings on the Soviet camps that have been published in Russia and the West. Using these, as well as her own original research in NKVD archives and interviews with survivors, Anne Applebaum has written a fully documented history of the camp system: from its origins under the tsars, to its colossal expansion under Stalin's reign of terror, its zenith in the late 1940s and eventual collapse in the era of glasnost. It is a gigantic feat of investigation, synthesis and moral reckoning.

"An important book. . . . It is fervently to be hoped that people will read Anne Applebaum's excellent, tautly written, and very damning history." --"The New York Times Book Review ""The most authoritative--and comprehensive--account of this Soviet blight ever published by a Western writer." --"Newsweek ""A titanic achievement: learned and moving and profound. . . . No reader will easily forget Applebaum's vivid accounts of the horrible human suffering of the Gulag." --"National Review ""A tragic testimony to how evil ideologically inspired dictatorships can be." -"The New York Times ""Lucid, painstakingly detailed, never sensational, it should have a place on every educated reader's shelves." -"Los Angeles Times ""Magisterial. . . . Certain to remain the definitive account of its subject for years to come. . . . An immense achievement." --"The New Criterion ""An excellent account of the rise and fall of the Soviet labor camps between 1917 and 1986. . . . A splendid book." --"The New York Review of Books ""Should become the standard history of one of the greatest evils of the 20th century." --"The Economist" "Thorough, engrossing . . . A searing attack on the corruption and the viciousness that seemed to rule the system and a testimonial to the resilience of the Russian people. . . . Her research is impeccable." -"San Francisco Chronicle" "An affecting book that enables us at last to see the Gulag whole. . . . A valuable and necessary book." -"The Wall Street Journal" "Ambitious and well-documented . . . Invaluable . . . Applebaum methodically, and unflinchingly, provides a sense of what it was like to enter and inhabit the netherworld of theGulag." -"The New Yorker""[Applebaum's] writing is powerful and incisive, but it achieves this effect through simplicity and restraint rather than stylistic flourish. . . . [An] admirable and courageous book." -"The Washington Monthly" "Monumental . . . Applebaum uses her own formidable reporting skills to construct a gripping narrative." -"Newsday" "Valuable. There is nothing like it in Russian, or in any other language. It deserves to be widely read." -"Financial Times" "A book whose importance is impossible to exaggerate. . . . Magisterial . . . Applebaum's book, written with such quiet elegance and moral seriousness, is a major contribution to curing the amnesia that curiously seems to have affected broader public perceptions of one of the two or three major enormities of the twentieth century." -"Times Literary Supplement" "A truly impressive achievement . . . We should all be grateful to [Applebaum]." -"The Sunday Times" (London) "A chronicle of ghastly human suffering, a history of one of the greatest abuses of power in the story of our species, and a cautionary tale of towering moral significance . . . A magisterial work, written in an unflinching style that moves as much as it shocks, and that glistens with the teeming life and stinking putrefaction of doomed men and rotten ideals." -"The Daily Telegraph "(London) "No Western author until Anne Applebaum attempted to produce a history of the Gulag based on the combination of eyewitness accounts and archival records. The result is an impressively thorough and detailed study; no aspect of this topic escapes her attention. Well written, accessible...enlightening for both the general reader andspecialists." --"The New York Sun""For the raw human experience of the camps, read Solzhenitsyn's "One Day in the Life of Ivan Denisovich" or Irina Ratushinskaya's "Grey is the Color of Hope," For the scope, context, and the terrible extent of the criminality, read this history." --"Chicago Tribune"

Anne Applebaum is the author of several books, including Gulag: A History, which won the 2004 Pulitzer Prize and the Duff Cooper Prize, and Iron Curtain, which in 2013 won the Duke of Westminster's Medal for Military Literature and the Cundill Prize in Historical Literature. She is Professor of Practice at the Institute for Global Affairs, London School of Economics, and a columnist for the Washington Post. She divides her time between Britain and Poland.

GOR001250079
Gulag: A History of the Soviet Camps by Anne Applebaum
Anne Applebaum
Used - Very Good
Paperback
Penguin Books Ltd
2004-04-29
624
0140283102
9780140283105
Winner of Duff Cooper Memorial Prize 2004 Winner of Pulitzer Prize General Non-Fiction Category 2004
Book picture is for illustrative purposes only, actual binding, cover or edition may vary.
This is a used book - there is no escaping the fact it has been read by someone else and it will show signs of wear and previous use. Overall we expect it to be in very good condition, but if you are not entirely satisfied please get in touch with us.