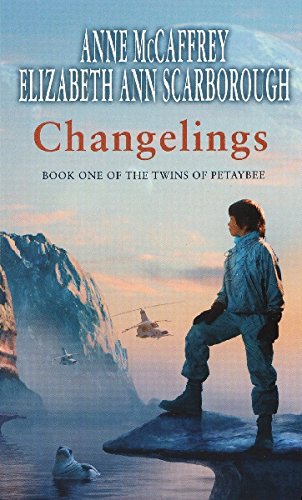 Used Price
$6.99
Free Shipping in the US
In Powers That Be, Power Lines and Power Play bestselling authors Anne McCaffrey and Elizabeth Ann Scarborough told the story of a sentient planet, Petaybee.
Reviews:
Trustpilot
Very Good

In Powers That Be, Power Lines and Power Play bestselling authors Anne McCaffrey and Elizabeth Ann Scarborough told the story of a sentient planet, Petaybee. In Changelings, the first of a new series of novels, they return to Petaybee. Ronan Born for Water Shongili and Murel Monster Slayer Shongili are the twin son and daughter of Yana Maddock and Sean Shongili. Born on Petyabee, their destiny is deeply intertwined with the sentient planet that is their home. For Ronan and Murel are more than human. Like their father, each can transform into a seal and converse telepathically with the planet's creatures - such as the friendly otter whose life they save one day from a pack of ravenous wolves. But the twins' bravery has unforeseen results when a visiting scientist witnesses their startling metamorphosis and becomes obsessed with their capture. To protect their children, Sean and Yana send them to stay with a powerful family friend on an orbiting space station. But no one realizes how curious Ronan and Murel are to discover the origins of their shape-shifting talent - and that their search for knowledge will place them squarely in the path of peril. Meanwhile Petaybee is changing - and much faster than an ordinary planet's natural evolution. It appears that portions of the sea are heating up and a landmass is suddenly rising from the depths. To investigate the startling occurrence, Sean heads out to the open water in his seal form. But the newly unstable region holds untold mysteries - and the potential for disaster.

"Those familiar with McCaffrey and Scarborough's first SF trilogy about life on the sentient planet Petaybee will best appreciate this solid start of a new series, which picks up where Power Play (1995) left off...Fast-paced adventure" * Publishers Weekly *
"Exciting and generously laced with humor...the characters and their interactions are so well realized as to utterly charm readers. Furthermore, to the Celtic and Inuit lore that informed the first trilogy, McCaffrey and Scarborough now add elements of the mythology and lore of Earth's South Sea Islanders" * Booklist *

Anne McCaffrey, the Hugo Award-winning author of the bestselling Dragonriders of Pern novels, is one of science fiction's most popular authors. She lives in a house of her own design, Dragonhold-Underhill, in County Wicklow, Ireland. Visit the author's website at www.annemccaffrey.net Elizabeth Ann Scarborough, winner of the Nebula Award for her novel The Healer's War, is the author of numerous fantasy novels. She has co-authored eight other novels with Anne McCaffrey. She lives on the Olympic Peninsula in Washington State Book Two of The Twins of Petaybee, Maelstrom, is now available from Bantam Press.

GOR001280741
Changelings by Anne McCaffrey
Anne McCaffrey
The Twins Of Petaybee
Used - Very Good
Paperback
Transworld Publishers Ltd
2007-01-01
336
0552154407
9780552154406
N/A
Book picture is for illustrative purposes only, actual binding, cover or edition may vary.
This is a used book - there is no escaping the fact it has been read by someone else and it will show signs of wear and previous use. Overall we expect it to be in very good condition, but if you are not entirely satisfied please get in touch with us.