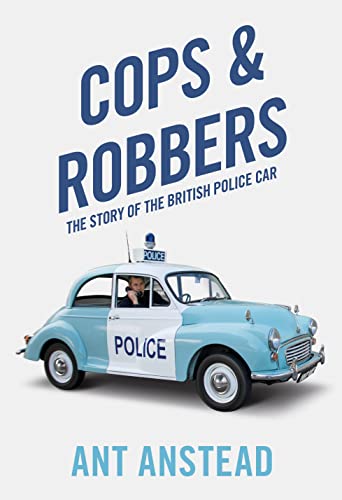 Cops and Robbers
by Ant Anstead

TV presenter and all-round car nut Ant Anstead takes the reader on a journey that mirrors the development of the motor car itself from a stuttering 20mph annoyance that scared everyone's horses to 150mph pursuits with aerial support and sophisticated electronic tracking.

Cops and Robbers: The Story of the British Police Car by Ant Anstead

TV presenter and all-round car nut Ant Anstead takes the reader on a journey that mirrors the development of the motor car itself from a stuttering 20mph annoyance that scared everyone's horses to 150mph pursuits with aerial support and sophisticated electronic tracking.

The British Police Force's relationship with the car started by chasing after pioneer speeding motorists on bicycles. As speed restrictions eased in the early twentieth century and car ownership increased, the police embraced the car. Criminals were stealing cars to sell on or to use as getaway vehicles and the police needed to stay ahead, or at least only one step behind. The arms race for speed, which culminated in the police acquiring high-speed pursuit vehicles such as Subaru Impreza Turbos, had begun.

Since then the car has become essential to everyday life. Deep down everyone loves a police car. Countless enthusiasts collect models in different liveries and legendary police cars become part of the nation's shared consciousness.

Ant Anstead spent the first six years of his working life as a cop. He was part of the armed response team, one of the force's most elite units. In this fascinating new history of the British police car, Ant looks at the classic cars, from the Met's Wolseleys to the Senator, the motorway patrol car officers loved most, via unusual and unexpected police vehicles such as the Arial Atom. It's a must-read for car enthusiasts, social historians and anyone who loves a good car chase, Cops and Robbers is a rip-roaring celebration of the police car and the men and women who drive them.

`As a petrol-head and former bobby, TV presenter Ant Anstead was the perfect person to write a new history of the police car'
Daily Express

Ant Anstead is best known for his day job as a television presenter and car builder and has been building bespoke cars since he was a kid. However, before embarking on a career as a car builder Ant was a police constable in Hertfordshire Constabulary. After two commendations for bravery, his career as one of the UK's youngest armed police officers came to an end when he was just 25. It is Ant's passion for cars and history as a member of the police family that has inspired this book.

Ant's introduction to TV came in 2014 when he co-hosted the hit Channel 4 series For The Love Of Cars alongside onscreen copper Philip Glenister. The series was a huge hit and returned in 2015 for a second series, and again in 2016 for a one-off special. In 2015 Ant hosted BBC2's pioneering live show Building Cars Live alongside James May and Kate Humble. In early 2017 Ant took over the reins of the world's most watched car restoration show Wheeler Dealers with Mike Brewer. He also hosted the 10-part Channel 4 show World's Most Expensive Cars.

GOR009112349
Cops and Robbers: The Story of the British Police Car by Ant Anstead
Ant Anstead
Used - Very Good
Hardback
HarperCollins Publishers
2018-05-17
432
0008244510
9780008244514
N/A
Book picture is for illustrative purposes only, actual binding, cover or edition may vary.
This is a used book - there is no escaping the fact it has been read by someone else and it will show signs of wear and previous use. Overall we expect it to be in very good condition, but if you are not entirely satisfied please get in touch with us.