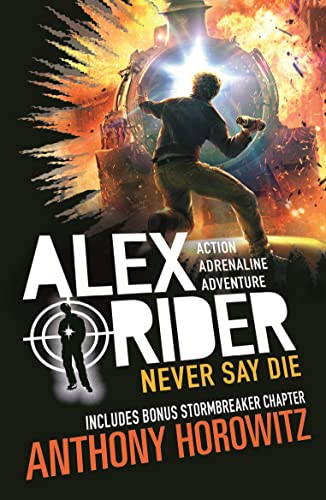 Alex Rider is back in this brand new, explosive mission in the number one bestselling series.

In this brand new, action-packed adventure, Alex Rider is trying to get his life back on track after the traumatic events of his last mission. But even Alex can't fight the past ... especially when it holds a deadly secret.

Never Say Die is one of the most dramatically ambitious of the novels so far... The suspense never slackens and the plot, even at its most far-fetched, is underpinned with nerdishly forensic detail, which has an irresistible "how stuff works" appeal. * The Daily Telegraph *
The Alex Rider stories are action adventures about defeating cartoon villains who are intent on global domination, but, although Alex is brave and athletic, what really makes him and the books special is his ingenuity... The series not only has explosions and chases: it shows that cleverness can win. * The Sunday Times, Children's Book of the Week *
Readers who like their adventure action packed will love the new Alex Rider novel, Never Say Die, by Anthony Horowitz. Our favourite teen spy whizzes around the world, from San Francisco to Egypt, at breakneck speed. * Irish Independent *
Anthony Horowitz is second to none when it comes to writing page-turners so his fans will be thrilled to read the new Alex Rider novel. * Daily Express *
This latest story is as exciting as its predecessors. An unputdownable read with breath-taking action and enough clever plot twists to make the reader dizzy. * Primary Times *

Anthony Horowitz is the author of the number one bestselling Alex Rider books and the Power of Five Series. He has enjoyed huge success as a writer for both children and adults. He was invited by the Ian Fleming estate to write the James Bond novel, Trigger Mortis and his most recent novel, Magpie Murders was a Sunday Times bestseller. Anthony also wrote the highly acclaimed Sherlock Holmes novels, The House of Silk and Moriarty. He has won numerous awards, including the Bookseller Association/Nielsen Author of the Year Award, the Children's Book of the Year Award at the British Book Awards, and the Red House Children's Book Award. In 2014 Anthony was awarded an OBE for Services to Literature.

GOR009447499
Never Say Die by Anthony Horowitz
Anthony Horowitz
Alex Rider
Used - Very Good
Paperback
Walker Books Ltd
2018-07-05
400
1406378674
9781406378672
N/A
Book picture is for illustrative purposes only, actual binding, cover or edition may vary.
This is a used book - there is no escaping the fact it has been read by someone else and it will show signs of wear and previous use. Overall we expect it to be in very good condition, but if you are not entirely satisfied please get in touch with us.