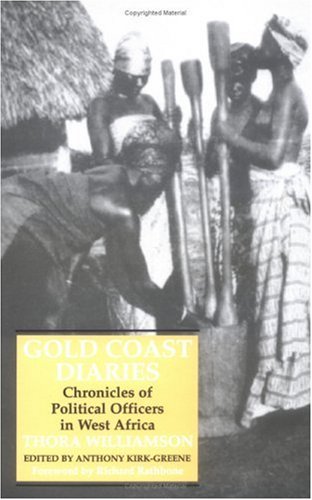 Used Price
$96.99
Free Shipping in the US
This text is based entirely on the diaries of political officers who served the Gold Coast Colony and Protectorate in the early years of imperial rule. It gives a graphic, sympathetic and often amusing first-hand account of the "daily round" of administration of duties.
Reviews:
Trustpilot
Very Good

This text is based entirely on the diaries of political officers who served the Gold Coast Colony and Protectorate in the early years of imperial rule. It gives a graphic, often amusing first-hand account of the "daily round" of administration, including the administration of justice, tax collection, solving disputes, life on trek in bush and forest, relations with chiefs and with ordinary people. They come to life as expatriates, no doubt privileged and regarded as the rulers, but faced with long separations from home and family, often unwell in a trying climate and living in isolation, but they come to terms with their situations and remain sure of the value of role. Many names appear who went on to great office among the proconsuls later in their careers - Sir Cecil Armitage, Sir Hugh Clifford, Sir Frank Fuller, Sir John Pickersgill - and all the diarists held important office in the territory and elsewhere in the Empire. Some, like R.S. Rattray, who spent their whole careers in the territory, became a fountain of knowledge and did valuable and detailed anthropological, historical, geographical and linguistic research invaluable to scholars and to readers with a taste for the exotic. And all served, certainly in their own lights, the good of African peoples in all their diversity. These "brief chronicles of time" provide a sharp, detailed and sympathetic insight into the life of the early Colonial Service.

Thora Williamson has extensively researched the history of the Gold Coast using diaries kept by other administrative officers kept in the Archives in Accra.

GOR007075646
Gold Coast Diaries: Chronicles of Political Officers in West Africa by Anthony Kirk-Greene
Anthony Kirk-Greene
Used - Very Good
Hardback
Bloomsbury Publishing PLC
2000-11-24
448
1860644511
9781860644511
N/A
Book picture is for illustrative purposes only, actual binding, cover or edition may vary.
This is a used book - there is no escaping the fact it has been read by someone else and it will show signs of wear and previous use. Overall we expect it to be in very good condition, but if you are not entirely satisfied please get in touch with us.