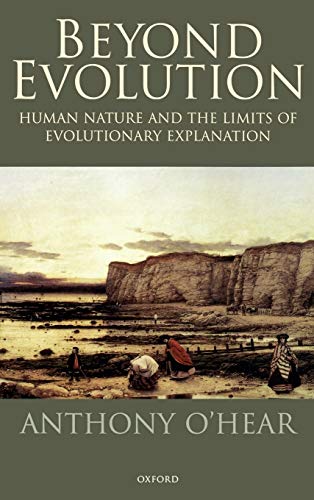 Out of Stock
$14.69
Argues that evolutionary theory cannot give a satisfactory account of such distinctive facets of human life as self-consciousness, the quest for knowledge, moral sense, and the appreciation of beauty. The author takes a stand against the fashion for explaining human behaviour in terms of evolution.
Very Good
Only 0 left

Anthony O'Hear takes a stand against the fashion for explaining human behaviour in terms of evolution. He maintains, controversially, that while the theory of evolution is successful in explaining the development of the natural world in general, it is of limited value when applied to the human world. Because of our reflectiveness and our rationality we take on goals and ideals which cannot be justified in terms of survival-promotion or reproductive advantage. O'Hear examines the nature of human self-consciousness, and argues that evolutionary theory cannot give a satisfactory account of such distinctive facets of human life as the quest for knowledge, moral sense, and the appreciation of beauty; in these we transcend our biological origins. It is our rationality that allows each of us to go beyond not only our biological but also our cultural inheritance: as the author says in the Preface, `we are prisoners neither of our genes nor of the ideas we encounter as we each make our personal and individual way through life'.

a valuable addition to the literature on evolutionary philosophy. * Nicholas Agar, Mind, Vol.110, No.438, April 2001 *
In that wonderful British tradition of clear, thoughtful and considered philosophy. * Alan Padgett, Books and Culture *
O'Hear has used formidable learning to bring together a mass of comment bearing on his initial question. * Professor S. A. Barnett, Interdisciplinary Science Reviews *
O'Hear's wide-ranging discussion clearly characterizes current struggles within the discipline of philosophy and provides, if not a compromise, a resolution to the most central debates. Highly recommended. * H. Storl, Choice *
O'Hear is conciliatory, fair and often interesting. * Mary Midgley, Times Higher Education Supplement *
challenging new book ... The line of argument pursued by O'Hear should be apparent, and it is applied with equal deftness to morality and aesthetics ... a profound, subtle and brilliantly argued book. * David S. Oderberg, Spectator *
This is a book which wise parents will put in the Christmas stockings of their too-clever-by-half undergraduate children. * Paul Johnson, Books of the Year 1997, Sunday Telegraph *
A traditional essay on time honoured philosophical problems. * Financial Times Weekend Section: 7.2.98 *
Beyond Evolution is a lucid and convincing challenge to the fashionable neo-Darwinism ... This is an elegant and at times moving book ... It deserves to be read widely, by all who are interested in morality and politics and aesthetics, and by everyone who, like Professor O'Hear, believes that "as human beings, we are not the unwitting victims of purely natural or historical processes". * Chris Woodhead, Sunday Telegraph *
A wide range of sophisticated ideas in evolutionary science. * Paul F. Brain, Journal of Natural History *
Challenging new book ... The details must be left to the reader to examine. In following the twists and turns of O'Hear's argument, he will pass fascinating side roads in which brief but brilliant sketches are given of Hegel, Sartre, Hayek, and others whose thought is relevant to this topic ... a profound, subtle and brilliantly argued book. * Spectator *

Anthony O'Hear is Professor of Philosophy at the University of Bradford, and Director of the Royal Institute of Philosophy.