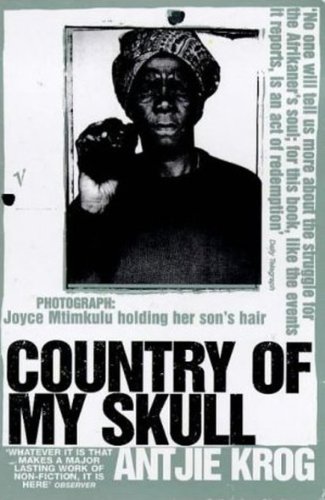 Country Of My Skull
by Antjie Krog

In Stock
$14.69
The first free elections in South Africa's history were held in 1994. Within a year legislation was drafted to create a Truth and Reconcilliation Commission to establish a picture of the gross human rights violations committed between 1960 and 1993.
Like New Very Good Good
Only 1 left

Country Of My Skull Summary

Country Of My Skull by Antjie Krog

The first free elections in South Africa's history were held in 1994. Within a year legislation was drafted to create a Truth and Reconcilliation Commission to establish a picture of the gross human rights violations committed between 1960 and 1993. It was to seek the truth and make it known to the public and to prevent these brutal events ever happening again. From 1996 and over the following two years South Africans were exposed almost daily to revelations about their traumatic past. Antije Krog's full account of the Commission's work using the testimonies of the oppressed and oppressors alike is a harrowing and haunting book in which the voices of ordinary people shape the course of history. WINNER OF SOUTH AFRICA'S SUNDAY TIMES ALAN PATON AWARD

Country Of My Skull Reviews

"One of the best books of the year" * The Economist *
"No one will tell us more about the struggle for the Afrikaner's soul; for this book, like the events it reports, is an act of redemption" * Daily Telegraph *
"Krog's account of the hearings, which recorded 20,000 statements from victims and nearly 8,000 applications for amnesty, is vivid and impassioned" * Mail on Sunday *
"Whatever it is that makes a major lasting work of non-fiction, it is here" * Observer *
"Her accounts are so powerful, her resilience, humour and compassion so engaging...to have written this book is heroic" * Sunday Times *

Antjie Krog was born in 1952 in Kroonstad, a town in the Free State province of South Africa. She has published eight volumes of poetry, several of which have been translated into European languages and have won international prizes. Reporting as Antjie Samuel, the author and her SABC radio team received the Pringle Award for excellence in journalism for reporting on the Truth and Reconcilliation Commission. Krog also won the Foreign Correspondents' Award for outstanding journalism for her articles on the Truth Commission. She went on to become parliamentary editor for SABC radio in 1997 and has since been appointed as an Extraordinary Professor in the Arts Faculty at the University of the Western Cape. Antjie Krog is married and is the mother of four children.

GOR010547577
Country Of My Skull by Antjie Krog
Antjie Krog
Used - Like New
Paperback
Vintage Publishing
1999-11-04
464
0099289792
9780099289791
Winner of Book Data Southern African Booksellers' Choice Award 1999
Book picture is for illustrative purposes only, actual binding, cover or edition may vary.
This is a used book - there is no escaping the fact it has been read by someone else and it will show signs of wear and previous use. Overall we expect it to be in very good condition, but if you are not entirely satisfied please get in touch with us.