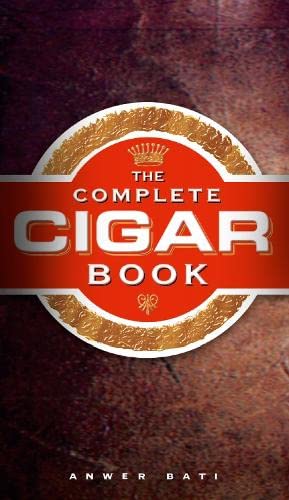 The Complete Cigar Book is the definitive book on cigars, satisfying a hunger for both information and guidance on the subject. At its core, the book aims to enhance the cigar lover's appreciation and knowledge.

The Complete Cigar Book is the definitive book on cigars, satisfying a hunger for both information and guidance on the subject. At its core, the book aims to enhance the cigar lover's appreciation and knowledge.

Written by a discerning aficionado of cigars, The Complete Cigar Book should answer all your burning questions. Very few cigar lovers, whether seasoned smokers or relative novices, could want to know more about cigars and cigar smoking than the comprehensive facts, opinions and tips included between these covers.

Beginning with Cigars in History, Anwer Bati details the origins of tobacco and traces its roots in South America and Cuba. He asks where the fascination with cigars came from and why people smoke cigars today. There is a social and cultural examination of the cigar as a statement of class and sex; one reason behind the cigar boom is that is has become chic for women to smoke premium cigars. The trend was led by super models and film stars such as Claudia Schiffer, Sharon Stone, Demi Moore and Whoopi Goldberg - many of whom have been featured on the covers of magazines such as Cigar Aficionado and Smoke. He also looks at cigars in art, literature and the movies.

In the second chapter, The Cigar from Leaf to Puff of Smoke, Anwer Bati explores the complicated stages from raw leaf to finished cigar. Although the book concentrates on handmade cigars, it also explains machine-made techniques. Anwer Bati writes about how to smoke a cigar correctly, what to drink while smoking and cigar accessories.

There is also an anecdotal Who's Who of famous smokers from the cigar world.

This book is the follow up to The Cigar Companion, first published in 1993 which went to three editions and sold 200,000 copies.

Anwer Bati is a television producer, responsible for programs on a wide variety of subjects for Britain's BBC and Channel 4. He is also a journalist and feature writer for leading magazines and newspapers in the UK. He has a specialised knowledge of cigars, and is a dedicated smoker of handmade cigars. In addition to The Cigar Companion, Anwer has written two books on non-cigar related subjects.

GOR001237081
The Complete Cigar Book by Anwer Bati
Anwer Bati
Used - Very Good
Hardback
HarperCollins Publishers
2000-12-04
248
0007109482
9780007109487
N/A
Book picture is for illustrative purposes only, actual binding, cover or edition may vary.
This is a used book - there is no escaping the fact it has been read by someone else and it will show signs of wear and previous use. Overall we expect it to be in very good condition, but if you are not entirely satisfied please get in touch with us.