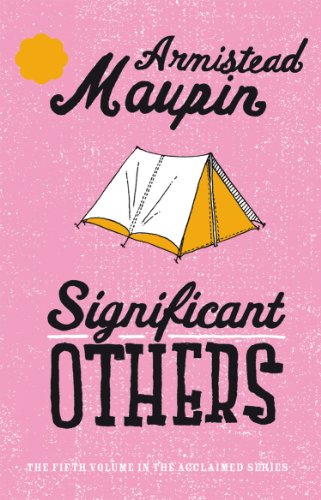 Significant Others
by Armistead Maupin

In Stock
$9.39
____________________Soon to be a Netflix series starring Ellen Page and Laura Linney .Significant Others, the fifth self-contained chronicle in the Tales of the City saga, is a cunningly observed class comedy that's sure to be relished by the cognoscenti and by new readers alike.
Very Good Good
Only 2 left

Significant Others: Tales of the City 5 by Armistead Maupin

____________________ Soon to be a Netflix series starring Ellen Page and Laura Linney . . . 'Some of the sharpest and most speakable dialogue you are ever likely to read' Guardian ______________________ A holiday in the redwoods goes uproariously awry when the opposing sexes camp out rather too close to each other for comfort. Among those entangled in the mayhem are DeDe Halcyon, reformed debutante, troubled house-husband Brian Hawkins, and the irrepressible Michael 'Mouse' Tolliver (arguably Maupin's most beloved creation). Significant Others, the fifth self-contained chronicle in the Tales of the City saga, is a cunningly observed class comedy that's sure to be relished by the cognoscenti and by new readers alike.

"Maupin is a richly gifted comic author... there is room in Armistead Maupin's universe for all of us" * Observer *
"Comedy in its most classical form... some of the sharpest and most speakable dialogue you are ever likely to read" -- Jonathan Coe * Guardian *
"San Francisco is fortunate in having a chronicler as witty and likeable as Armistead Maupin" * Independent *
"Like those of Dickens and Wilkie Collins, Armistead Maupin's novels have all appeared originally as serials... it is the strength of this approach, with its fantastic adventures and astonishingly contrived coincidences, that makes these novels charming and compelling" * Literary Review *
"Wise, witty, loving and caring about the foibles and frailties we all seem to have" -- David Hockney

Armistead Maupin was born in Washington, D.C. in 1944 but was brought up in Raleigh, North Carolina. A graduate of the University of North Carolina, he served as a naval officer in Vietnam before moving to California in 1971 as a reporter for the Associated Press. In 1976 he launched his daily newspaper serial, Tales of the City, in the San Francisco Chronicle. The first fiction to appear in an American daily for decades, Tales grew into an international sensation when compiled and rewritten as novels. Maupin's six-volume Tales of the City sequence - Tales of the City, More Tales of the City, Further Tales of the City, Babycakes, Significant Others and Sure of You - are now multi-million bestsellers published around the world. He is also the author of two other bestselling novels, Maybe the Moon and The Night Listener, which was recently made into a film starring Robin Williams and Toni Collette. He lives in San Francisco, California. Official Author Web Site: www.ArmisteadMaupin.com

GOR001229744
Significant Others: Tales of the City 5 by Armistead Maupin
Armistead Maupin
Tales of the City
Used - Very Good
Paperback
Transworld Publishers Ltd
2000-09-01
320
055299880X
9780552998802
N/A
Book picture is for illustrative purposes only, actual binding, cover or edition may vary.
This is a used book - there is no escaping the fact it has been read by someone else and it will show signs of wear and previous use. Overall we expect it to be in very good condition, but if you are not entirely satisfied please get in touch with us.