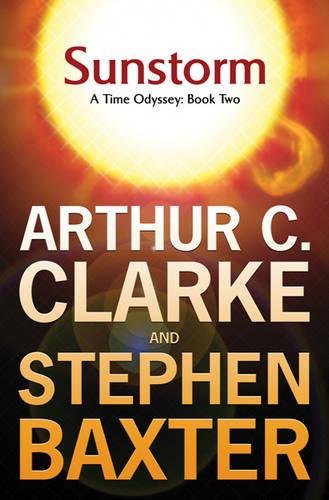 In Stock
$15.49
Two of the biggest names in SF together again; the sequel to the acclaimed Time's Eye.
Very Good
Only 3 left

The observatory on the moon has the proof. Life on earth will be incinerated in April 2037 by a massive solar flare. It is building down and it is unstoppable. With only 18 months until doomsday mankind must unite and embark on the most ambitious engineering project ever: the construction, at the La Grange point between the sun and the earth, of a deflecting mirror the diameter of our home planet. The price of failure? Extinction.

One scientist, an expert on the sun, predicted the flare. One person who knew nothing about the sun nevertheless knew the exact date that life on earth would come to an end. She had witnessed the bizarre time dislocations brought by the 'eyes'. She knows who is responsible.

This is hard SF in the grand tradition of the genre

A page turner of a read. This is another fine piece of work by Stephen Baxter. * DREAMWATCH *
"Squarely in Stephen Baxter territory... gripping." -- Anthony Brown * STARBURST *
"This is science fiction with the emphasis on science and the concepts are big, hard and very clever." -- Jon Courtenay Grimwood * GUARDIAN *
"The science was innovative and often majestic, the picture of 2037 compelling, and the lean, direct, deft nature of the writing powered the narrative along... two of the most respected talents writing today." * OUTLAND *
...an impressive level of skill and an open-mindedness about what constitutes intelligence. -- Jon Courtenay Grimwood * SFX *
"Two of the biggest hitters in the SF world. Full of big ideas, potted physics lessons and an intruiging meillenia-old alien threat." -- Dave Golder * BBC FOCUS *

Arthur C. Clarke was born in Minehead in 1917. During the Second World War he served as a radar instructor for the RAF, rising to the rank of flight-lieutenant. After the war, he entered King?s college, London taking, in 1948, his Bsc in physics and mathematics with first class honours.One of the most respected of all science-fiction writers, he has won Kalinga Prize, the Aviation Space-Writers? Prize and the Westinghouse Science Writing Prize. He also shared an Oscar nomination with Stanley Kubrick for the screenplay of 2001: A Space Odyssey, which was based on his story, ?The Sentinel?. He has lived in Sri Lanka since 1956. Stephen Baxter is the pre-eminent SF writer of his generation. Published around the world he has also won major awards in the UK, US, Germany, and Japan. Born in 1957 he has degrees from Cambridge and Southampton. He lives in Buckinghamshire with his wife.

GOR001222151
Sunstorm by Arthur C. Clarke
Arthur C. Clarke
Gollancz S.F.
Used - Very Good
Hardback
Orion Publishing Co
2005-07-21
256
0575075317
9780575075313
N/A
Book picture is for illustrative purposes only, actual binding, cover or edition may vary.
This is a used book - there is no escaping the fact it has been read by someone else and it will show signs of wear and previous use. Overall we expect it to be in very good condition, but if you are not entirely satisfied please get in touch with us.