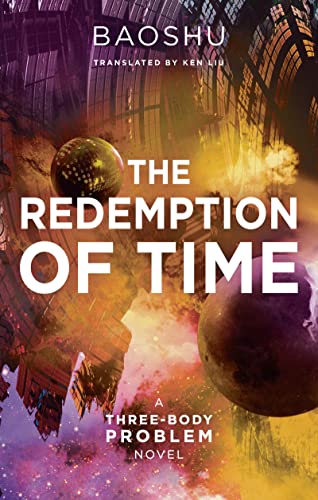 The Redemption of Time
by Baoshu

Set in the universe of Cixin Liu's bestselling Three-Body Problem trilogy, and continuing the saga. This original story by Baoshu-published with Liu's blessing-charts the aftermath of the conflict between humanity and the extraterrestrial Trisolarans.

The Redemption of Time Summary

The Redemption of Time by Baoshu

Published with the blessing of Cixin Liu, The Redemption of Time extends the astonishing universe conjured by the Three-Body Trilogy.

Death is no release for Yun Tianming - merely the first step on a journey that will place him on the frontline of a war that has raged since the beginning of time.

At the end of the fourth year of the Crisis Era, Yun Tianming died. He was flash frozen, put aboard a spacecraft and launched on a trajectory to intercept the Trisolaran First Fleet. It was a desperate plan, a Trojan gambit almost certain to fail. But there was an infinitesimal chance that the aliens would find rebooting a human irresistible, and that someday, somehow, Tianming might relay valuable information back to Earth.

And so he did. But not before he betrayed humanity.

Now, after millennia in exile, Tianming has a final chance at redemption. A being calling itself The Spirit has recruited him to help wage war against a foe that threatens the existence of the entire universe. A challenge he will accept, but this time Tianming refuses to be a mere pawn... He has his own plans.

Published with the blessing of Cixin Liu, The Redemption of Time extends the astonishing universe conjured by the Three-Body Trilogy. You'll discover why the universe is a 'dark forest', and for the first time, you'll come face-to-face with a Trisolaran...

Customer Reviews - The Redemption of Time

Baoshu, or 'divine tree', is the pen-name of Li Jun. Baoshu studied philosophy at Peking University and KU Leuven in Belgium. His debut novel The Ruins of Time won the 2014 Chinese Nebula prize.