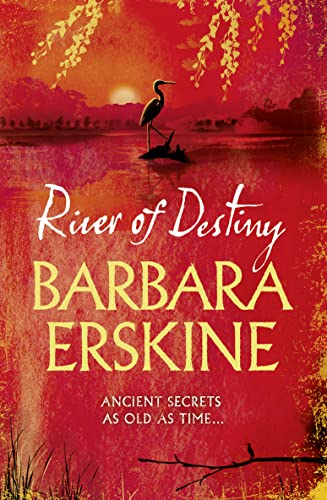 River of Destiny
by Barbara Erskine

From the bestselling author of Time's Legacy and Lady of Hay comes a thrilling new novel, River of Destiny, an epic story that spans Anglo Saxon Britain, Victorian Suffolk and the present day.

River of Destiny by Barbara Erskine

From the bestselling author of Time's Legacy and Lady of Hay comes a thrilling new novel, River of Destiny, an epic story that spans Anglo Saxon Britain, Victorian Suffolk and the present day.

On the banks of the River Deben in Suffolk are ancient barns dating back to Anglo Saxon times - within these walls lie secrets that have been buried for centuries.

New arrivals Zoe and Ken move into one of the converted barns, ready to start a life away from the hustle and bustle of the city. To the outside world they seem happy, but they are growing further apart by the day. Meanwhile the strange presence Zoe feels within their home and the ghostly shapes she sees through the cloying mists on the river are getting harder to ignore.

Nearby, farmers are ploughing the land beside the river and human bones are found. Are they linked to the Victorian tragedy the locals whisper about? The secret of the grassy mound has remained untouched through history, but now that it's been disturbed, will there be devastating consequences?

GOR003966738
River of Destiny by Barbara Erskine
Barbara Erskine
Used - Very Good
Hardback
HarperCollins Publishers
2012-07-05
496
0007302304
9780007302307
N/A
Book picture is for illustrative purposes only, actual binding, cover or edition may vary.
The book has been read but remains in clean condition. All pages are intact and the cover is intact. Some minor wear to the spine.