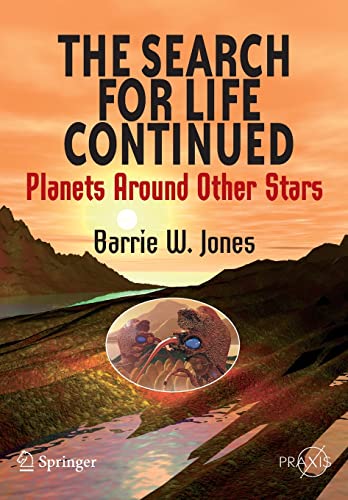 The Search for Life Continued
by Barrie William Jones

The first popular science book to examine scientifically the methods for detecting planets around other stars, the possibility that they might support life, and speculate as to what aliens might look like. It poses the question: are we alone?

The Search for Life Continued Summary

The Search for Life Continued: Planets Around Other Stars by Barrie William Jones

Barrie Jones addresses the question "are we alone?", which is one of the most frequently asked questions by scientists and non-scientists alike. In The Search for Life Continued, this question is addressed scientifically, and the author is not afraid to include speculation. Indeed, the author believes beyond reasonable doubt that we are not alone and this belief is based firmly on frontier science of the most imaginative kind.

The author concentrates on planetary systems beyond our own but starts with life on Earth, which is the only life we know to exist, and which provides guidance on how best to search for life elsewhere. Planets are the most likely abode of life and so we start the quest with the search for planets beyond the Solar System - exoplanets. The methods of searching are outlined and the nature of hundreds of exoplanetary systems so far discovered described. In the near future we expect to discover habitable Earth-like planets. But are they actually inhabited? How could we tell? All will be revealed.

This full color book is written for everybody who wants to stay in close contact with the latest on possible life on other planets.

The Search for Life Continued Reviews

"The book is organised along didactic lines, with Jones introducing the background material necessary in order to place the search for extraterrestrial life into its correct scientific context. ... this is a good primer on the subject for any amateur astronomer or student." (Stuart Clark, BBC Sky at Night, November, 2008)

"As this book recognises, we are now approaching an era where astronomers will have the techniques to investigate the fundamental issue of whether there is life outside our own solar system in a fully scientific fashion. ... Jones ... carefully laying all the foundations before actually turning his attention directly to the matter in hand. ... preliminary chapters impart much interesting information. ... This is a book that one can learn much from, and is undoubtedly worth reading ... ." (Jonathan Tennyson, Contemporary Physics, Vol. 50 (6), November-December, 2009)

"This book is ... firmly based in real science, its speculations are reasoned and reasonable, and it's written and illustrated in a way that makes a complex subject readily accessible to non-scientists (this reviewer included). ... The following view is particularly apt: 'To consider the Earth as the only populated world in infinite space is as absurd as to assert that in an entire field of millet, only one grain will grow.' ... A great guide to the real ET. Recommended." (Peter Grego, Popular Astronomy, January-March, 2010)

"This book is all about the search for life, the search for planets in other systems and how it is done. ... this is the friendly guide to the search for alien planets, alien cultures and just plain alien life, with big brains or not. ... Mr. Jones's easy writing style, plus the fact that he enjoys what he is writing about, that really hooks you. ... A great gift for young adults or older adult who are ... interested in the subject." (Michael Valdivielso, Amazon, October, 2008)

"This work is written in the form of a textbook, but with a breezy style and at a level that would be accessible to most readers. ... What distinguishes Jones's work, however, is the clear diagrams and illustrations (many of which are in color), and graphs and tables that are not generally included in other similar works. Summing Up: Recommended. Lower- and upper-division undergraduates; general audiences." (T. Barker, Choice, Vol. 47 (3), November, 2009)

"The book gives the background to other stars and solar systems that might be capable of supporting life and the various ways in which the, now, hundreds of exoplanets have been discovered. ... beautifully written in a way that makes the ideas and concepts easily understandable - greatly helped by the many excellent diagrams and colour images. ... I have had to cover much of this material for use in lectures ... . no better book on the subject and highly commend it to you." (Ian Morison, Amazon, January, 2010)

"This book presents a well-designed introduction to searches for extra-terrestrial existence, defining and describing life as we know it in its myriad forms and establishing the limits for such life other than on the surface of the Earth. ... The astronomer ... also be surprised that there are 'several ways in which observations of a star can give us its mass' precisely enough to be relevant here, and that 'dwarfs have been most observed [for radial velocity] because their spectra are clean." (Elizabeth Griffin, The Observatory, Vol. 130 (1215), April, 2010)

"A wide variety of topics is covered throughout this book ranging through astronomy, geology, chemistry and telescopes which shows that the search for life encompasses many scientific disciplines. The book is well structured and Barrie Jones' clear writing style makes it very readable. The explanation of the concepts is very good and supported by the many colour pictures ... . I highly recommend this book as an introduction to the search for life on other worlds. It is a very enjoyable and fascinating read." (Mike Foulkes, Journal of the British Astronomical Association, Vol. 120 (2), 2010)

GOR010084665
The Search for Life Continued: Planets Around Other Stars by Barrie William Jones
Barrie William Jones
Popular Astronomy
Used - Very Good
Paperback
Springer-Verlag New York Inc.
2008-06-17
277
0387765573
9780387765570
N/A
Book picture is for illustrative purposes only, actual binding, cover or edition may vary.
This is a used book - there is no escaping the fact it has been read by someone else and it will show signs of wear and previous use. Overall we expect it to be in very good condition, but if you are not entirely satisfied please get in touch with us.