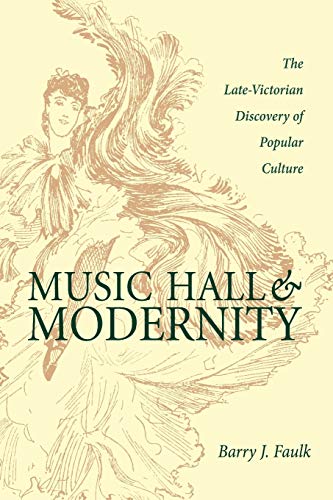 Used Price
$32.99
Free Shipping in the US
The late-Victorian discovery of the music hall by English intellectuals marks a crucial moment in the history of popular culture.
Reviews:
Trustpilot
Very Good

The late-Victorian discovery of the music hall by English intellectuals marks a crucial moment in the history of popular culture. Music Hall and Modernity demonstrates how such pioneering cultural critics as Arthur Symons and Elizabeth Robins Pennell used the music hall to secure and promote their professional identity as guardians of taste and national welfare. These social arbiters were, at the same time, devotees of the spontaneous culture of "the people."

In examining fiction from Walter Besant, Hall Caine, and Henry Nevinson, performance criticism from William Archer and Max Beerbohm, and late-Victorian controversies over philanthropy and moral reform, scholar Barry Faulk argues that discourse on music-hall entertainment helped consolidate the identity and tastes of an emergent professional class. Critics and writers legitimized and cleaned up the music hall, at the same time allowing issues of class, respect, and empowerment to be negotiated.

Music Hall and Modernity offers a complex view of the new middle-class, middlebrow mass culture of late-Victorian London and contributes to a body of scholarship on nineteenth-century urbanism. The book will also interest scholars concerned with the emergence of a professional managerial class and the genealogy of cultural studies.

"Faulk makes an important contribution to understanding the development of 'popular culture' as a category in the 19th century, and the book's theoretical sophistication assures it will interest scholars in a wide range of disciplines."
"Faulk has incorporated an impressive amount of theoretical writing from a variety of schools, and steers his way through its various pitfalls admirably and instructively. In its ecumenical and measured treatment of the demands of contemporary theory, the book ranks with the best of recent treatments of Victorian London." -- David Pike, author of Subterranean Cities: Subways, Cemeteries, Sewers and the Culture of Paris and London
"In its subject and detail, Music Hall and Modernity is fascinating and absorbing to specialist and general reader alike."

Barry J. Faulk is a professor in the English Department at Florida State University and the author of British Rock Modernism: The Story of Music Hall in Rock (2010). He has published numerous articles on British literature and cultural studies.

GOR010716945
Music Hall and Modernity: The Late-Victorian Discovery of Popular Culture by Barry J. Faulk
Barry J. Faulk
Used - Very Good
Paperback
Ohio University Press
2014-03-15
256
082142095X
9780821420959
Winner of Outstanding Academic Title 2019
Book picture is for illustrative purposes only, actual binding, cover or edition may vary.
This is a used book - there is no escaping the fact it has been read by someone else and it will show signs of wear and previous use. Overall we expect it to be in very good condition, but if you are not entirely satisfied please get in touch with us.