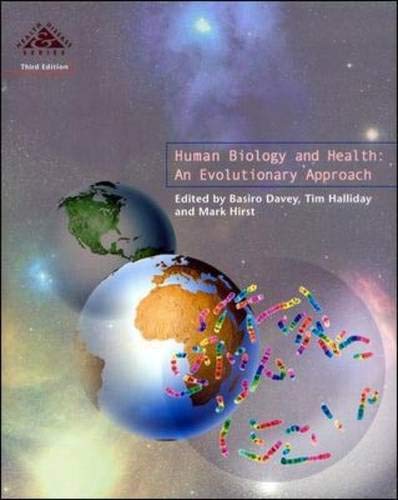 This book starts from the premise that patterns of illness and disability in modern human populations have been influenced by the biological and cultural evolution of the human species over the last five million years. Developments as diverse as the transition to an upright posture, the farming of grains, close contact with domestic animals, the use of cooking, and the proliferation of urban settlements, industrial processes and international travel have all had profound effects on human health. The evolution of infectious, genetic and degenerative diseases are viewed through the interaction between human biology and human culture, which helps explain the variation in susceptibility to disease between individuals and populations.

The authors are biologists who have written an introduction to human biology and evolution that is accessible to a general readership, but which aims to teach some fundamental biological principles, including DNA and the nature of genes, the structure and functions of cells, the evolution of infectious agents and the human immune system, and the interaction between human physiology and the physical environment. The potential for new biomedical and genetic technologies to offer partial solutions to a few major health problems is considered, alongside the ethical dilemmas they pose for health services and for individuals in the developed world. The book contains case-studies on genetic screening and gene therapy, lactose intolerance and dioxin pollution, and ends with the suggestion that the pace of cultural change is now seriously challenging human capacity to evolve genetic and social adaptations to maintain and improve health.

Why 'an evolutionary approach'?
The human biological heritage
The story of life in a few pages
Inheritance and variation
Living with other species
Surviving infectious disease
Digestion and dietary change
On living longer
Tinkering with nature
Living with the chemical industrial environment
The impact of modern culture
Abbreviations list
References and further sources, including internet sites
Index.

GOR001229445
Human Biology And Health by Basiro Davey
Basiro Davey
Used - Very Good
Paperback
Open University Press
2001-06-01
400
0335208398
9780335208395
N/A
Book picture is for illustrative purposes only, actual binding, cover or edition may vary.
This is a used book - there is no escaping the fact it has been read by someone else and it will show signs of wear and previous use. Overall we expect it to be in very good condition, but if you are not entirely satisfied please get in touch with us.