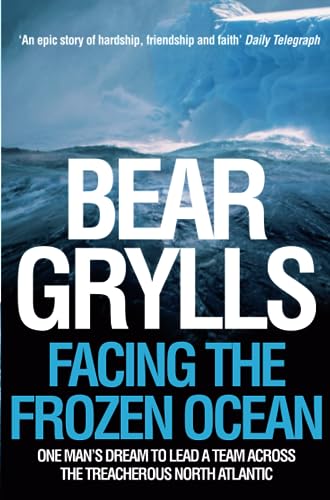 In Stock
$6.69
Five British men in an open, rigid inflatable boat fighting for their lives in perhaps the most dangerous seas in the world.
Very Good
9 in stock

Facing the Frozen Ocean: One Man's Dream to Lead a Team Across the Treacherous North Atlantic by Bear Grylls

'An epic story of hardship, friendship and faith.' Daily Telegraph

Shortlisted for the William Hill Sports Book of the Year Award, this is the compelling account of the most recent adventure of the bestselling author of Facing Up.

It started out as a carefully calculated attempt to complete the first unassisted crossing of the frozen north Atlantic in an open rigid inflatable boat, but it became a terrifying battle against storm-force winds, crashing waves and icebergs as large as cathedrals. Starting from the remote north Canadian coastline, Bear Grylls and his crew crossed the infamous Labrador Sea, pushed on through ice-strewn waters to Greenland and then found themselves isolated in a perfect storm 400 miles from Iceland.

Compelling, vivid and inspirational, Facing the Frozen Ocean will appeal to all Bear Grylls' many readers and win him many more.

An epic story of hardship, friendship and faith. * Daily Telegraph *
Riveting. * Daily Express *
Grylls is certainly proof that the age of great explorers has not completely passed us by. * Scotsman *

GOR001228674
Facing the Frozen Ocean: One Man's Dream to Lead a Team Across the Treacherous North Atlantic by Bear Grylls
Bear Grylls
Used - Very Good
Paperback
Pan Macmillan
2005-07-01
336
0330427075
9780330427074
N/A
Book picture is for illustrative purposes only, actual binding, cover or edition may vary.
This is a used book - there is no escaping the fact it has been read by someone else and it will show signs of wear and previous use. Overall we expect it to be in very good condition, but if you are not entirely satisfied please get in touch with us.