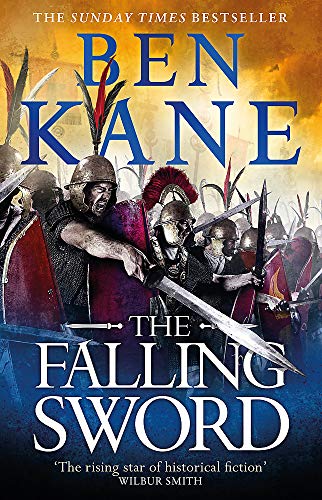 The Falling Sword
by Ben Kane

Used Price
$12,69
Free Shipping in the US
CAN GREECE RESIST THE MIGHT OF ROME? Get ready for the climax of the Roman invasion of Greece in Sunday Times bestseller Ben Kane's latest historical adventure.
Reviews:
Trustpilot
Very Good

The Falling Sword by Ben Kane

CAN GREECE RESIST THE MIGHT OF ROME?
Get ready for the climax of the Roman invasion of Greece in Sunday Times bestselling Ben Kane's latest historical adventure.
ONE FINAL CLASH
Reeling from his defeat at the hands of the Macedonians, Rome's furious General Flamininus gathers his legions for the final strike on King Philip's mighty phalanx.

AN EMPIRE ON THE EDGE
Both leaders know the victor will rule Greece, and both armies will do everything in their power to claim the ultimate prize.

TWO HEROES PREPARED TO DIE
Fighting on opposing sides, Felix and Demetrios think they have survived the worst of the campaign. But between vicious infighting, unruly locals, and intense battle, both will be tested as the final showdown between two great civilisations begins . . .

THE FALLING SWORD is the gripping follow-up to CLASH OF EMPIRES from Ben Kane, the master of historical fiction - for fans of Simon Scarrow, Harry Sidebottom, Conn Iggulden and Bernard Cornwell.

To read one of Ben Kane's astonishingly well-researched, bestselling novels is to know that you are, historically speaking, in safe hands. -- Elizabeth Buchan * DAILY MAIL *
Fascinating. -- Antonia Senior * THE TIMES *
This is a stunningly visual and powerful read: Kane's power of description is second to none... Perfect for anyone who is suffering from Game of Thrones withdrawal symptoms. -- Helena Gumley-Mason * THE LADY *

Kenya born, Irish by blood and UK resident, Ben Kane's passion for history has seen him change career from veterinary medicine to writing, and taken him to more than 60 countries, and all 7 continents. During his travels and subsequent research, including walking hundreds of miles in complete Roman military gear, he has learned much about the Romans and the way they lived. Ten of his thirteen novels have been Sunday Times top ten bestsellers, and his books are published in twelve languages; a million copies have sold worldwide. In 2016, his research was recognised by Bristol University with an honorary Doctor of Letters degree. Kane lives in Somerset with his wife and children, where he writes full time.

GOR010066706
The Falling Sword by Ben Kane
Ben Kane
Clash of Empires
Used - Very Good
Paperback
Orion Publishing Co
2019-05-02
400
1409173437
9781409173434
N/A
Book picture is for illustrative purposes only, actual binding, cover or edition may vary.
This is a used book - there is no escaping the fact it has been read by someone else and it will show signs of wear and previous use. Overall we expect it to be in very good condition, but if you are not entirely satisfied please get in touch with us.