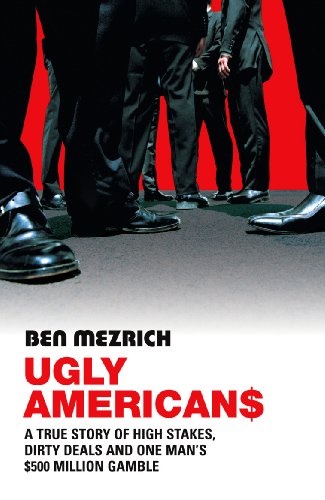 In Stock
$7.69
The true story of the Ivy League hedge fund cowboys who gambled with the dangerously high stakes of the Asian stock market.
Very Good
7 in stock

The true story of the Ivy League hedge fund cowboys who gambled with the dangerously high stakes of the Asian stock market. John Malcolm, high school football hero and Princeton graduate made his millions back in the early '90s, a time when dozens of elite young American graduates made their fortunes in hedge funds in the Far East, beating the Japanese at their own game, riding the crashing waves of the Asian stock markets, gambling at impossibly high stakes and winning. Failure meant not only bankruptcy and disgrace a la Nick Leeson, but potentially even death - at the hands of the Japanese Yakuza: one of the world's most notoriously violent organised crime syndicates. Ugly Americans tells Malcolm's story, and that of others like him, in a high octane book, filled with glamour, money and the dangers these incur, this true story is a cross between Mezrich's own best-selling Bringing Down the House and Michael Lewis' Liar's Poker.

"The author of the compelling Bringing Down the House ... returns with another vivid true story ... Any movie shouldn't lack for colour" * GQ *
"When the movie rights to a novel are snapped up by Hollywood A-lister Kevin Spacey, you know its something special. And Ugly Americans most definitely is ... An incredible true story ... it's impossible not to be amazed and absorbed into this parallel universe where East meets West, gangsters meet cowboys and everyone is just an earthquake away from disaster" * Scottish Daily Record *
"The propulsive narrative fairly roars "guilty pleasure." Yet Ugly Americans is revelatory, a rush that leaves the reader reeling but reflective" * Philadelphia Inquirer *
"[Contains] all the ingredients of a great narrative - a main character the reader can relate to, an appealing love interest, money, danger, the need for acceptance, suspense ... In a truly engaging look at how an innocent who thinks he knows the world does actually end up understanding a small but significant piece of it, Mezrich manages to incorporate solid journalism into a narrative that just plain works" * Publisher's Weekly *
"A high-octane passion play pitting a young man's ambition against his sense of humanity" * Oregonian *

Ben Mezrich is the New York Times bestselling author of The Accidental Billionaires and Bringing Down the House in addition to many other books, both fiction and non-fiction. The major motion picture 21, starring Kevin Spacey, was based on Bringing Down the House. The Oscar-winning film The Social Network was adapted from The Accidental Billionaires. Mezrich lives in Boston with his wife and son.

GOR001238282
Ugly Americans by Ben Mezrich
Ben Mezrich
Used - Very Good
Paperback
Cornerstone
2005-07-07
352
0099455056
9780099455059
N/A
Book picture is for illustrative purposes only, actual binding, cover or edition may vary.
This is a used book - there is no escaping the fact it has been read by someone else and it will show signs of wear and previous use. Overall we expect it to be in very good condition, but if you are not entirely satisfied please get in touch with us.