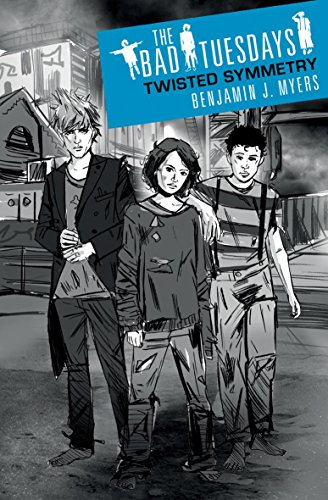 Used Price
$7.19
Free Shipping in the US
Can three children save the Universe against impossible odds? Find out in the gripping first instalment of The Bad Tuesdays sequence.
Reviews:
Trustpilot
Very Good

Orphan, Chess Tuesday, and her brothers, Box and Splinter, don't want to be next. But they are being tracked by two powerful enemy organizations, each intent on destroying the other . . .

Who is good and who is evil?
Why do both sides need the Tuesdays?
And can anyone escape the hunters?

Chess, Box and Splinter are about to embark on a terrifying mission to find out.

From the moment I began Twisted Symmetry I was hooked and I found it really hard to put down... [it] had me on the edge of my seat ... I was so emotionally invested in the characters that I did not want their story to end ... a great start to a series and I can't wait to dive into and follow the Tuesday's on their next adventure. * MUCH LOVED BOOKS *

Benjamin Myers was born in the Potteries in 1967. After studying Philosophy and Psychology at Leeds University, Myers attended the Royal Military Academy at Sandhurst. He saw active service as a Troop Commander in the First Gulf War and is a qualified battlefield survival instructor. In 1993, he attained his Diploma in Law from the University of London and subsequently has been a barrister in a busy practice in Manchester, specialising in serious crime, often representing vulnerable defendants, in particular juveniles. He also lectures other legal professions on mentally disordered offenders and human rights. Married with three children, Benjamin Myers lives in Bowdon, Cheshire.

GOR001599802
Bad Tuesdays: Twisted Symmetry: Book 1 by Benjamin J. Myers
Benjamin J. Myers
The Bad Tuesdays
Used - Very Good
Paperback
Hachette Children's Group
2009-01-08
336
1842556452
9781842556450
Short-listed for Waterstone's Children's Book Prize 2009 (UK) Long-listed for The Brilliant Book Award 2009 (UK)
Book picture is for illustrative purposes only, actual binding, cover or edition may vary.
This is a used book - there is no escaping the fact it has been read by someone else and it will show signs of wear and previous use. Overall we expect it to be in very good condition, but if you are not entirely satisfied please get in touch with us.