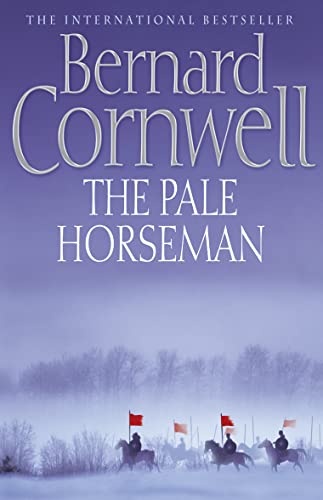 Enter the historical world of THE PALE HORSEMAN, a story of divided loyalties and desperate heroism, with a wonderful range of characters desperately striving to survive as the battle sweeps over them.

The compelling sequel to the bestselling THE LAST KINGDOM.

Enter the historical world of THE PALE HORSEMAN, a story of divided loyalties and desperate heroism, with a wonderful range of characters desperately striving to survive as the battle sweeps over them.

The compelling sequel to the bestselling THE LAST KINGDOM.

Uhtred, Northumbrian born, raised a Viking and now married to a Saxon, is already a formidable figure and warrior. But at twenty he is still arrogant, pagan and headstrong, so not a comfortable ally for the thoughtful, pious Alfred. But these two, with Alfred's family and a few of Uhtred's companions, are apparently all that remains of the Wessex leadership after a disastrous truce.

It is the lowest time for the Saxons. Defeated comprehensively by the Vikings who now occupy most of England, Alfred and his surviving followers retreat to the trackless marshlands of Somerset. There, forced to move restlessly to escape betrayal or detection, using the marsh mists for cover, they travel by small boats from one island to another, hoping that they can regroup and find some more strength and support.

They seek refuge in Athelney, a tidal swamp to which Alfred's kingdom has shrunk. Uhtred finds himself torn between his Danish foster brother and the winning Vikings, and his growing respect for the stubborn leadership of Alfred. He must decide whether to rebuild the Saxons' strength from his watery base and help them to take on the Vikings once more.

GOR001220518
The Pale Horseman (The Last Kingdom Series, Book 2) by Bernard Cornwell
Bernard Cornwell
The Last Kingdom Series
Used - Very Good
Hardback
HarperCollins Publishers
2005-10-03
400
0007149921
9780007149926
N/A
Book picture is for illustrative purposes only, actual binding, cover or edition may vary.
This is a used book - there is no escaping the fact it has been read by someone else and it will show signs of wear and previous use. Overall we expect it to be in very good condition, but if you are not entirely satisfied please get in touch with us.