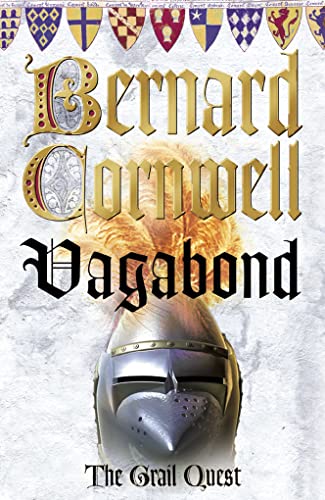 In Harlequin, Thomas of Hookton travelled to France as an archer and there discovered a shadowy destiny, which linked him to a family of heretical French lords who sought Christendom's greatest relic: the Holy Grail.

Vagabond continues the story of a search that Thomas is reluctant to pursue. He doubts the grail's existence, and he has other promises to keep, promises that take him back to Brittany where a vicious civil war is about to reach its climax. But other folk, far more powerful than Thomas and his friends, fear the rumour of the grail's existence and force Thomas to pursue the relic, while his enemies, faceless and ruthless, fear Thomas's destiny and determine to destroy him. Thomas's allies are few and weak: a hedge priest, a renegade French knight, a Jewish adventurer and a crippled English soldier - but now they must unite and find greater strengths to pierce the mysteries of Christendom.

GOR002837730
Vagabond (The Grail Quest, Book 2) by Bernard Cornwell
Bernard Cornwell
The Grail Quest
Used - Very Good
Paperback
Unknown
0
0007151462
9780007151462
N/A
Book picture is for illustrative purposes only, actual binding, cover or edition may vary.
This is a used book - there is no escaping the fact it has been read by someone else and it will show signs of wear and previous use. Overall we expect it to be in very good condition, but if you are not entirely satisfied please get in touch with us
Trustpilot