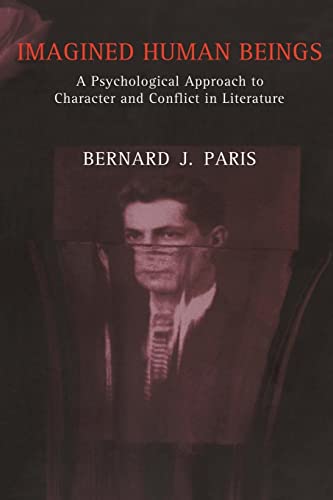 Used Price
$26.99
Free Shipping in the US
Explores the inner conflicts of some of literature's most famous characters, using Karen Horney's psychoanalytic theories to understand the behaviour of these characters as we would the behaviour of real people
Reviews:
Trustpilot
Very Good

Imagined Human Beings: A Psychological Approach to Character and Conflict in Literature by Bernard Jay Paris

One of literature's greatest gifts is its portrayal of realistically drawn characters--human beings in whom we can recognize motivations and emotions. In Imagined Human Beings, Bernard J. Paris explores the inner conflicts of some of literature's most famous characters, using Karen Horney's psychoanalytic theories to understand the behavior of these characters as we would the behavior of real people.
When realistically drawn characters are understood in psychological terms, they tend to escape their roles in the plot and thus subvert the view of them advanced by the author. A Horneyan approach both alerts us to conflicts between plot and characterization, rhetoric and mimesis, and helps us understand the forces in the author's personalty that generate them. The Horneyan model can make sense of thematic inconsistencies by seeing them as the product of the author's inner divisions. Paris uses this approach to explore a wide range of texts, including Antigone, "The Clerk's Tale," The Merchant of Venice, A Doll's House, Hedda Gabler, Great Expectations, Jane Eyre, The Mayor of Casterbridge, Wuthering Heights, Madame Bovary, The Awakening, and The End of the Road.

"This is literary criticism at its most perceptive. Theory is subservient to a deeply engaged reading of works Professor Paris clearly loves. To read his analysis of Emma Bovary or Hedda Gabler is to gain an enriched insight into characters whom we thought we knew so well." -- Phyllis Grosskurth,author of Byron, The Flawed Angel

GOR010080203
Imagined Human Beings: A Psychological Approach to Character and Conflict in Literature by Bernard Jay Paris
Bernard Jay Paris
Used - Very Good
Paperback
New York University Press
1997-10-01
304
0814766560
9780814766569
N/A
Book picture is for illustrative purposes only, actual binding, cover or edition may vary.
This is a used book - there is no escaping the fact it has been read by someone else and it will show signs of wear and previous use. Overall we expect it to be in very good condition, but if you are not entirely satisfied please get in touch with us.