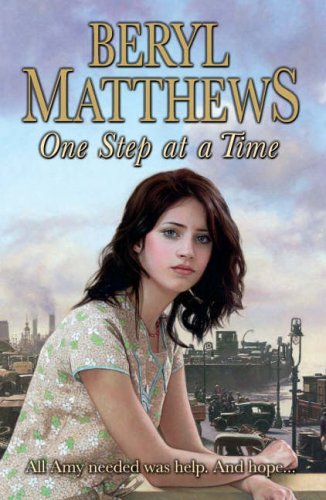 One Step at a Time
by Beryl Matthews

One Step at a Time Summary

One Step at a Time by Beryl Matthews

Amy Carter is just fourteen when she has to leave school to look after her sick mother. When her father is tried and hanged for the murder of a local man and shortly after, her mother dies, Amy is left with no-one.

Shunned even by former friends and neighbours, Amy is found at her mother's grave by artist Benjamin Scott, who met Amy just once, read about the family's difficulties and tracked her down. He takes the girl to his lodgings in Chelsea where Amy, with Ben, his fellow housemates, and the kindly landlady, Mrs Dalton, finds a real home for the first time.

Amy thinks she has found happiness beyond her wildest dreams when John, a young doctor, falls in love with her and they are soon married. But heartbreak comes with the outbreak of war. Will John, Ben, and all those who are so dear to her survive? And without their support, will Amy's past return to haunt her?

Customer Reviews - One Step at a Time

Beryl Matthews grew up in a family of avid readers. Amongst other jobs she has worked at an aircraft factory and as a credit controller.

She published her first book at the age of 71 after joining a writers' group and has since written over twenty novels. Her hobbies include travelling, swimming and golf but writing is her number one priority.