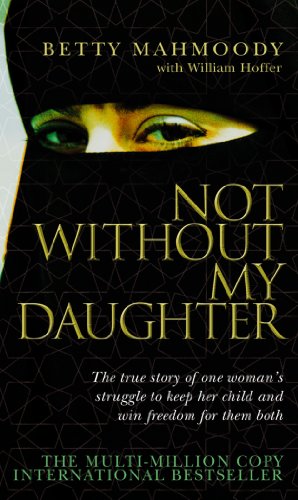 Not Without My Daughter
by Betty Mahmoody

In Stock
$8.99
'You are here for the rest of your life. You are here until you die.'Betty Mahmoody and her husband, Dr Sayyed Bozorg Mahmoody ('Moody'), came to Iran from the USA to meet Moody's family.
Very Good Good
15 in stock

Not Without My Daughter Summary

Not Without My Daughter by Betty Mahmoody

'You are here for the rest of your life. Do you understand? You are not leaving Iran. You are here until you die.' Betty Mahmoody and her husband, Dr Sayyed Bozorg Mahmoody ('Moody'), came to Iran from the USA to meet Moody's family. With them was their four-year-old daughter, Mahtob. Appalled by the squalor of their living conditions, horrified by what she saw of a country where women are merely chattels and Westerners are despised, Betty soon became desperate to return to the States. But Moody, and his often vicious family, had other plans. Mother and daughter became prisoners of an alien culture, hostages of an increasingly tyrannical and violent man. Betty began to try to arrange an escape. Evading Moody's sinister spy network, she secretly met sympathisers opposed to Khomeini's savage regime. But every scheme that was suggested to her meant leaving Mahtob behind for ever...

Not Without My Daughter Reviews

"Compelling drama... fascinating, if disturbing... a moving story of one person's fortitude, courage and faith" * The New York Times Book Review *
"The horrific situation in which Betty Mahmoody found herself would give any loving mother nightmares. Here is an amazing story of a woman's courage and total devotion to her child that will have you rooting for them along every inch of their treacherous journey" -- Susan Oudot * Woman's Own *

Betty Mahmoody now lives again in Michigan with Mahtob and her two sons from her first marriage. William Hoffer is the co-author of Midnight Express and Saved: The Story of the Andrea Doria. He lives in Virginia.

GOR001231736
Not Without My Daughter by Betty Mahmoody
Betty Mahmoody
Used - Very Good
Paperback
Transworld Publishers Ltd
2004-07-05
528
0552152161
9780552152167
N/A
Book picture is for illustrative purposes only, actual binding, cover or edition may vary.
This is a used book - there is no escaping the fact it has been read by someone else and it will show signs of wear and previous use. Overall we expect it to be in very good condition, but if you are not entirely satisfied please get in touch with us.