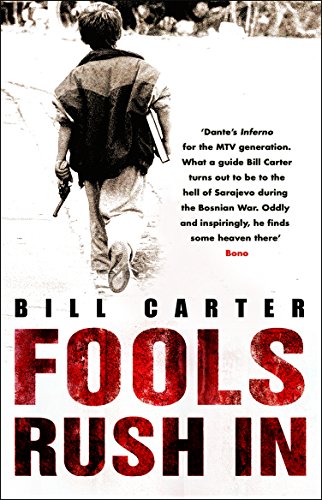 Fools Rush In
by Bill Carter

In Stock
$9.99
He makes friends with the artistic community of Sarajevo and fights alongside them for survival in a place where food and water are scarce, where you meet death every day, but crucially where life, love and laughter ring out all the same.
Like New Very Good Good
Only 1 left

Fools Rush In by Bill Carter

Some trips are chosen, others choose you. When tragedy strikes Bill Carter's life he finds himself drawn to a war zone. In the modern heart of darkness, the besieged city of Sarajevo, we meet a man rebuilding the ruins of his former self in the most unlikely of places. Carter joins a maverick aid organization, 'The Serious Road Trip', and dodges snipers to deliver food and supplies to those the UN can't reach. He makes friends with the artistic community of Sarajevo and fights alongside them for survival in a place where food and water are scarce, where you meet death every day, but crucially where life, love and laughter ring out all the same. Carter takes his journey one surreal step further and enlists the help of major rock band U2.The ensuing events go no small way to influencing the course of the war and Western awareness of it.

"'This lively book is like Good Morning Vietnam crossed with a Conrad novel'" * The Times *
"'Dante's Inferno for the MTV generation. What a guide Bill Carter turns out to be to the hell of Sarajevo during the Bosnian War. Oddly and inspiringly, he finds some heaven there'" * Bono *
"'Fiercely intelligent...It is a deeply felt emotional reaction to the horror and the humanity that Bill Carter would witness, into ordinary life surviving beneath the gun, told with the passion of one who came to identify himself with the tragedy of Bosnia, not as an observer'" * Observer *

Bill Carter was born in 1966. He has spent the last fifteen years travelling the globe, visiting and living in over forty countries; his jobs have ranged from English teacher to commercial fisherman to assistant film director to photo-journalist. He has also produced and directed several documentaries, including the award-winning Miss Sarajevo. Bill currently lives in southern Arizona. Fools Rush In is his first book. For more information on Miss Sarajevo or to see some of Bill Carter's photographs taken during his time in Bosnia, please visit his website: www.billcarter.cc

GOR010350801
Fools Rush In by Bill Carter
Bill Carter
Used - Like New
Paperback
Transworld Publishers Ltd
2005-02-01
416
0552771996
9780552771993
N/A
Book picture is for illustrative purposes only, actual binding, cover or edition may vary.
This is a used book - there is no escaping the fact it has been read by someone else and it will show signs of wear and previous use. Overall we expect it to be in very good condition, but if you are not entirely satisfied please get in touch with us.