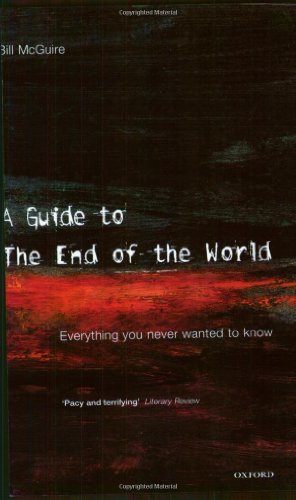 A Guide to the End of the World
by Bill McGuire

In Stock
$7,69
Earth is an extraordinarily fragile place that is fraught with danger for all lifeforms. Bill McGuire explores the potential catastrophes that face our planet and race.
Very Good
Only 2 left

A Guide to the End of the World Summary

A Guide to the End of the World: Everything You Never Wanted to Know by Bill McGuire

Life on earth will come to an end. It's just a matter of when. A Guide to the End of the World focuses on the many potential catastrophes facing our planet and our species in the future, and looks at both the probability of these events happening and our chances of survival. Coverage extends from discussion of the likely consequences of the current global warming to the inevitable destruction of the earth in the far future, when it is enveloped by our giant, bloated sun. In between, other 'end of the world scenarios' will be examined, including the New Ice Age, asteroid and comet impact, supervolcanoes, and mega-tsunami.

Bill McGuire is Professor of Geohazards and Director of the Benfield Greig Hazard Research Centre, University College, London. He has worked on volcanoes all over the world, including Mount Etna, Rabaul, and Mount Pinatubo, is a member of the Association of British Sciences Writers, and a regular contributor to radio, television, and the press. He recently presented his own Radio 4 series on the forces of nature, and was featured in two Horizon programs as the leading British expert on volcanoes and mega-tsunami ('tidal waves'); these documentaries scored the highest ratings of the year on BBC2 (6 million).

Foreword; 1. A very short introduction to the earth; 2. Global warming: a lot of hot air?; 3. Whatever happened to the next Ice Age?; 4. The enemy within: supervolcanoes, giant quakes, and megatsunami; 5. The threat from space: asteroid & comet impacts; 6. Five billion years AD: the earth's final days; 7. Epilogue

GOR001220478
A Guide to the End of the World: Everything You Never Wanted to Know by Bill McGuire
Bill McGuire
Used - Very Good
Paperback
Oxford University Press
2003-03-13
212
0192804529
9780192804525
N/A
Book picture is for illustrative purposes only, actual binding, cover or edition may vary.
This is a used book - there is no escaping the fact it has been read by someone else and it will show signs of wear and previous use. Overall we expect it to be in very good condition, but if you are not entirely satisfied please get in touch with us.