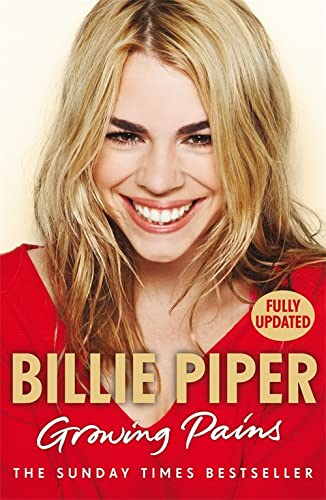 From teenage pop star to Las Vegas bride and on to Doctor Who - this is the up-close and personal story of the country's favourite girl next door.

This is an astonishingly candid insight into the world of Billie Piper. Famous since the age of 15 - first as the face of Smash Hits, then as a pop singer with three No.1 hits in less than three years - Billie Piper has won over the critics and the British public for a second time by re-inventing herself as an actress in BBC productions of Much Ado About Nothing, The Canterbury Tales and, of course, Doctor Who.

And that's just the professional Billie. In this book, for the first time, she talks honestly about her whirwind romance and marriage to Chris Evans, about her battles with anorexia and the dark side of teen fame. Moving, funny and honest, this is a page-turning read by one of the nation's favourite stars.

'There's little doubt Billie's successfully made the difficult leap from teenybopper popster to acclaimed actress. But what's more astonishing is that the ambitious young girl left school without a GCSE to her name, battled anorexia and married at 18 came out of it all as a dignified, warm, talented woman.' * Daily Express *
'Billie is a remarkable woman and for the first time lifts the lid on her life to date with astonishing honesty.' * The Sun *
'Finally, a young star's autobiography that justifies the hundreds of pages' * Daily Telegraph *
'Why can't more stars be like honest Billie?' * Independent on Sunday *
'Funny and life-affirming.' * Glamour *
'A compelling read, full of shock revelations' * Woman *

Billie Piper was born in Swindon in 1983. In her first career, starting at age fifteen, she had seven top five hit singles in five years, including three number ones. At eighteen, she married TV presenter Chris Evans in Las Vegas. She has recently appeared in BBC productions of The Canterbury Tales, Much Ado About Nothing and most famously, as Rose in Doctor Who. She was voted Most Popular Actress at the National Television Awards in 2005 and won The Times Breakthrough Award in 2006.

GOR010560886
Billie Piper: Growing Pains by Billie Piper
Billie Piper
Used - Like New
Paperback
Hodder & Stoughton General Division
2007-08-09
384
0340932805
9780340932803
N/A
Book picture is for illustrative purposes only, actual binding, cover or edition may vary.
This is a used book - there is no escaping the fact it has been read by someone else and it will show signs of wear and previous use. Overall we expect it to be in very good condition, but if you are not entirely satisfied please get in touch with us.