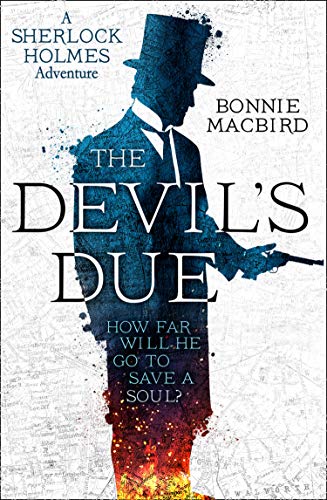 The Devil's Due
by Bonnie MacBird

After Art in the Blood and Unquiet Spirits, Holmes and Watson are back in the third of Bonnie MacBird's critically acclaimed Sherlock Holmes Adventures, written in the tradition of Conan Doyle himself.

The Devil's Due Summary

The Devil's Due (A Sherlock Holmes Adventure, Book 3) by Bonnie MacBird

After Art in the Blood and Unquiet Spirits, Holmes and Watson are back in the third of Bonnie MacBird's critically acclaimed Sherlock Holmes Adventures, written in the tradition of Conan Doyle himself.

It's 1890 and the newly famous Sherlock Holmes faces his worst adversary to date - a diabolical villain bent on destroying some of London's most admired public figures in particularly gruesome ways. A further puzzle is that suicide closely attends each of the murders. As he tracks the killer through vast and seething London, Holmes finds himself battling both an envious Scotland Yard and a critical press as he follows a complex trail from performers to princes, anarchists to aesthetes. But when his brother Mycroft disappears, apparently the victim of murder, even those loyal to Holmes begin to wonder how close to the flames he has travelled. Has Sherlock Holmes himself made a deal with the devil?

Customer Reviews - The Devil's Due

The Devil's Due Reviews

'One of the best Sherlock Holmes novels of recent memory, at least as entertaining as Anthony Horowitz's The House of Silk ... MacBird's artistry will keep readers eagerly turning the pages just to see how she orchestrates the big reveal.'-MICHAEL DIRDA, Washington Post

'Gets a definite recommendation from me. MacBird is sure-footed with atmosphere and voices, there's lots of action and a solid mystery, but no shortage of real tenderness between Holmes and Watson, and the conclusion is as satisfying as anything Conan Doyle wrote. If you're looking for a Sherlockian Christmas present for someone, introduce them to Bonnie MacBird's series.'-Sherlock Holmes Journal

'Bonnie MacBird's best Holmes novel so far and cements her as one of the best pastiche authors out there ... This did not disappoint. Get it as soon as you can.'-Doylockian

'A rich stew of Holmesian tropes and lore which romps along.'-Shots

'Bonnie MacBird at the top of her game!.'-Curtis Armstrong, author of Revenge of the Nerd; A Plum Assignment

Bonnie MacBird is passionate about Victorian London and Sherlock Holmes. She lives in an 1890 building right off Baker Street, and fell in love with Holmes as a schoolgirl in her native California. After many years in the entertainment industry as a film executive, Emmy winning producer and screenwriter, she now writes the critically acclaimed Sherlock Holmes Adventure Series for HarperCollins, bringing the much loved detective back, traditional style, in full-length adventures. Meticulous research, a flair for deductions and a decided sense of humour have turned these into fan favourites. ART IN THE BLOOD was translated into seventeen languages and was followed by UNQUIET SPIRITS, THE DEVIL'S DUE and the upcoming THE THREE LOCKS.

GOR010720673
The Devil's Due (A Sherlock Holmes Adventure, Book 3) by Bonnie MacBird
Bonnie MacBird
A Sherlock Holmes Adventure
Used - Very Good
Paperback
HarperCollins Publishers
2019-10-10
384
0008195080
9780008195083
N/A
Book picture is for illustrative purposes only, actual binding, cover or edition may vary.
This is a used book - there is no escaping the fact it has been read by someone else and it will show signs of wear and previous use. Overall we expect it to be in very good condition, but if you are not entirely satisfied please get in touch with us.