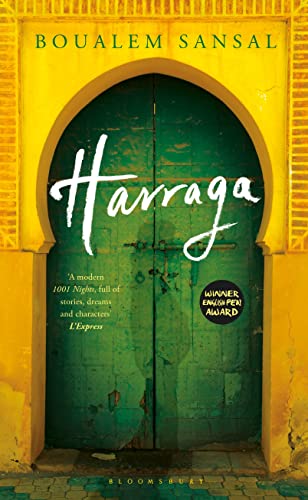 In a crumbling colonial mansion besieged by slums in the old quarter of Algiers, Lamia lives a life of self-imposed isolation, communing only with her ghosts by day, working as a paediatrician by day. Her family are dead, but for her beloved brother Sofiane, who has become a harraga - one of those who risk their lives attempting to flee the country for a better life in Europe/elsewhere. Lamia's tranquil, ordered existence is turned upside-down when a sixteen-year-old stranger knocks on her door in the middle of the night. Only because she has been sent by Sofiane, Lamia takes the girl in. Pregnant, unmarried and dressed in garish finery like an X-Factor contestant, Cherifa is talkative, curiously innocent, and utterly unafraid. She enters the house like a whirlwind, and leaves a trail of destruction in her wake. Lamia must try to teach her, to protect her against a world where a woman who is not meek, subservient, married is an affront, where a girl who is pregnant can be killed to spare her family's honour. By turns funny and lyrical, luminous and sardonic, Harraga, by the controversial author of An Unfinished Business, is the engaging and ultimately tragic story of two very different women who become friends and allies in a patriarchal world. Boualem Sansal is the acclaimed the author of An Unfinished Business, which Bloomsbury published in 2010. His books have won many prizes, including France's Prix du premier roman he has also recently been nominated for the Nobel Prize in Literature. His books have been published in seventeen languages.

Demotic cliches, literary illusions and lyrical descriptions, translated from the French with verve by Frank Wynne. As the increasingly distraught woman leads us through the various hells of Algiers, characters proliferate: quirky, cynical, sometimes repellent. Stories emerge, sharp with black humour; it's a crowded, meandering path ... At its heart an indictment of both authoritarian government and fundamentalism, and the threat both pose to women * Spectator *
Writing fearlessly and often controversially ... A fervent statement. Lamia's capacity for love is as intense as her rage ... Boualem Sansal knows no bounds in his eloquent reasoning and passionate defiance. Lamia's voice is a shout from the darkness, but it is an unwavering one * The Lady *
Humane, searching and audacious ... This is Sansal's first to be translated into English. One hopes the rest will follow * Guardian on An Unfinished Business *
A searing account of evil, guilt and shame * Financial Times *
This is a remarkable novel ... and a remarkably brave one. It is compelling and gripping. The horrors of man's inhumanity to man are presented unblinkingly * Scotsman *
An intense and brooding portrayal of women's lives in contemporary Algeria ... The reader is well served by Frank Wynne's excellent translation, which does justice to Sansal's experiments with form, his use of poetry as well as prose, and the interplay between Algerian forms of oral storytelling, the use of cliche, repetition and stream-of-consciousness * Times Literary Supplement *

Born in 1949, Boualem Sansal lives in Boumerdes, near Algiers. His first novel Le Serment des Barbares [The Barbarians' Sermon] (1999) won the Prix du Premier Roman. In 2003 he was dismissed from his government job for criticising the Algerian government and in 2006 his books were banned in his native country following the publication of an open letter to the Algerian government, Poste restante: Alger, lettre de colere et d'espoir a mes compatriotes. Today he is considered not only one of Algeria's most important writers, but a literary figure of international stature. Frank Wynne has won three major prizes for his translations: the 2002 IMPAC for Atomised by Michel Houellbecq, the 2005 Independent Foreign Fiction Prize for Windows on the World by Frederic Beigbeder and the 2008 Scott Moncrieff Prize for Holiday in a Coma by the same author.

GOR006885424
Harraga by Boualem Sansal
Boualem Sansal
Used - Like New
Hardback
Bloomsbury Publishing PLC
2014-11-06
288
1408843986
9781408843987
N/A
Book picture is for illustrative purposes only, actual binding, cover or edition may vary.
The book has been read, but looks new. The book cover has no visible wear, and the dust jacket is included if applicable. No missing or damaged pages, no tears, possible very minimal creasing, no underlining or highlighting of text, and no writing in the margins.