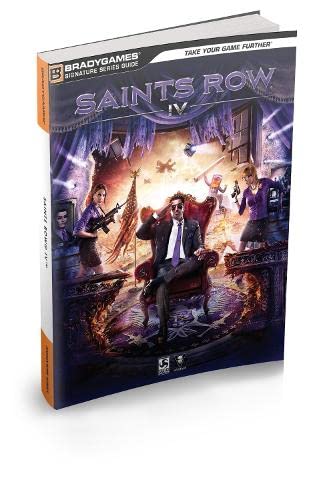 Helps you learn how to defeat the evil alien empire in Saints Row IV with the help of BradyGames, as well as get an in-game weapon skin pack. This book offers a complete guide to the advanced game in the action-adventure series, Saints Row.

Learn how to defeat the evil alien empire in Saints Row IV with the help of BradyGames, plus get an exclusive in-game weapon skin pack

Saints Row IV Signature Series Strategy Guide is the complete guide to the latest game in the action-adventure series, Saints Row, from Deep Silver. This strategy guide leads you through the entire game, enabling you to exterminate the alien invaders. You'll also gain access to an exclusive in-game weapon skin pack, only available through the guide.

With the Saints Row IV Signature Series Strategy Guide you'll get comprehensive coverage of the story with expert strategy for completing every mission, plus maps of every area of the alien Steelport simulation, featuring key locations and important pick ups. Learn tactics for maximising your superpowers to leap over buildings, outrun vehicles, battle enemies with telekinesis, and conquer the alien menace. Find a complete run-down of all alien weapons in your arsenal, including damage, fire rate, and special extraterrestrial effects. Plus, uncover the strengths and weaknesses of the enemy alien species and learn techniques for defeating the alien warlord, Zinyak.

As the leader of the The Saints, five years after the events of Saints Row: The Third, you've now become the President of the United States and are under attack by a powerful alien scourge. The Saints get trapped in an alternate version of Steelport and find themselves with superpowers. Embark on an action packed quest to set things right in the world and destroy the Zin empire.

Pick up all the tips and techniques you'll need to survive in this other worldly action adventure instalment of the Saints Row series available for XBox360, PS3, and PC. Take your game further with the Saints Row IV Signature Series Strategy Guide and BradyGames.

BradyGames, an imprint of DK and a division of Penguin Random House Inc., is the world s leading publisher of strategy content for PC and console video games. BradyGames understands what gamers both casual and hardcore want and need from strategy guides. Every guide features in-depth content, detailed screen captures, quick-reference tips, and professional strategy. Prima Games is also a leader in the digital strategy realm, offering interactive maps, streaming video, searchable online guides and apps, and a full website at primagames.com."
GOR005489692
9780744015034
0744015030
Saints Row IV Signature Series Strategy Guide by BradyGames
BradyGames
Used - Very Good
Paperback
DK Publishing
2013-08-13
356
N/A
Book picture is for illustrative purposes only, actual binding, cover or edition may vary.
This is a used book - there is no escaping the fact it has been read by someone else and it will show signs of wear and previous use. Overall we expect it to be in very good condition, but if you are not entirely satisfied please get in touch with us
Trustpilot