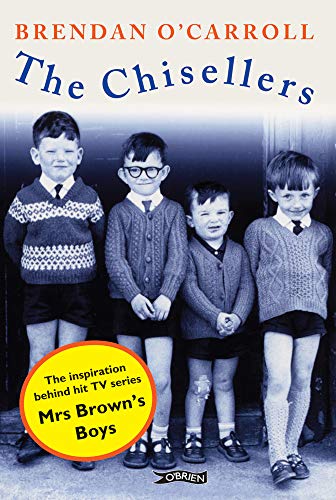 The Chisellers
by Brendan O'Carroll

Used Price
$6.99
Free Shipping in the US

Book 2: The Agnes Browne Trilogy
Continuing the hilarious saga of the ups and downs, minor scrapes and major run-ins of the seven children of Agnes Browne. Full of joy, humour, pathos and Dublinese.
With a new introduction by the author, Brendan O'Carroll.

The Chisellers by Brendan O'Carroll

The second book in the Agnes Browne trilogy, the basis for the BAFTA-award winning TV series Mrs Brown's Boys.

Continuing the hilarious saga of the ups and downs, minor scrapes and major run-ins of the seven children of Agnes Browne, The Mammy of the bestselling novel of the same name. Full of joy, humour, pathos and the raw vernacular of the Dublin streets.

Agnes Browne and her seven 'chisellers' take on the world ... and win!

It's three years since Redser's death and Agnes Browne soldiers on, being mother, father and referee to her fighting family of seven. Helped out financially by her eldest, and hormonally by the amorous Pierre, Agnes copes with family tragedy, success and the move from the Jarro to the 'wilds of the country' -- suburban Finglas.

And when the family's dreams are threatened by an unscrupulous gangster he learns a costly lesson -- don't mess with the children of Agnes Browne!

With a new introduction by the author, Brendan O'Carroll.

International star of multiple BAFTA-award-winning TV series Mrs Brown's Boys and Mrs Brown's Boys: d'Movie, Brendan O'Carroll's story begins very modestly. The youngest of eleven children, Brendan O'Carroll was born in Dublin's inner-city in 1955. His mother, Maureen, was a Labour TD (MP) and a huge influence on his life. He left school at 12 and worked as a waiter, trying many other occupations in his spare time - disco manager, milkman, pirate radio disc-jockey, painter-decorator etc. For a time he ran his own bar and cabaret lounge before being persuaded to try the comedy circuit. The gigs were small at first and even included his own version of `Blind Date', but word soon got around about this original and outrageous funnyman: soon there was standing-room only. The real turning point in Brendan's career was his first appearance on The Late Late Show, Ireland's longest-running chat show: the studio audience and viewers loved him. His first video Live at the Tivoli went straight to No 1, knocking U2 out of the top slot and pushing Garth Brooks to No 3. In 1994 he was voted Ireland's No 1 Variety Entertainer at the National Entertainment Awards. He went on to make best-selling videos, and a bestselling record, as well as touring in Ireland, the UK and the USA. The radio show Mrs Browne's Boys, written by and starring Brendan, had a phenomenal daily audience on 2FM and led to the creation of Agnes Browne as the central character in Brendan's first novel, The Mammy, published in 1994. The book topped the bestseller charts in Ireland for months and the film rights were snapped up. The Mammy was followed by The Chisellers and The Granny: all three were huge bestsellers. Holywood came calling when Anjelica Huston read and loved Brendan's books: she made her directorial debut with Agnes Browne. Brendan toured several other stage shows with Agnes Browne as the central character, before a BBC producer saw the show and felt there was television potential. Initially broadcast in a quiet late evening slot, Mrs Brown's Boys quickly became a huge word-of-mouth hit, and quickly moved to primetime, including several Christmas Day specials. A huge success in Australia and other countries where it has been shown, the enduring appeal of Agnes and her family is secure. Brendan continues to write and perform as Agnes Browne, most recently in Mrs Brown's Boys: d'Movie (2014)

GOR001279206
The Chisellers by Brendan O'Carroll
Brendan O'Carroll
Used - Very Good
Paperback
O'Brien Press Ltd
1995-10-31
192
086278414X
9780862784140
N/A
Book picture is for illustrative purposes only, actual binding, cover or edition may vary.
This is a used book - there is no escaping the fact it has been read by someone else and it will show signs of wear and previous use. Overall we expect it to be in very good condition, but if you are not entirely satisfied please get in touch with us.