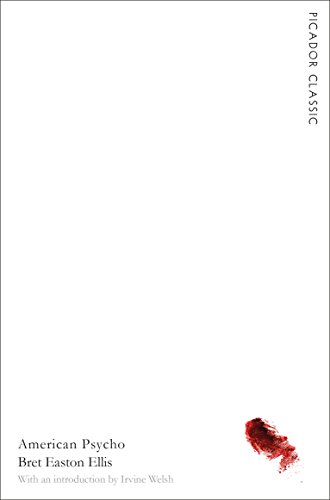 Used Price
$8.99
Free Shipping in the US
An international bestseller and true modern classic, American Psycho is a bleak, bitter, black comedy about a world we all recognize but do not wish to confront.
Reviews:
Trustpilot
Very Good Good

A cult classic, adapted into a film starring Christian Bale.

Patrick Bateman has it all: good looks, youth, charm, a job on Wall Street, reservations at every new restaurant in town and a line of girls around the block. He is also a psychopath. A man addicted to his superficial, perfect life, he pulls us into a dark underworld where the American Dream becomes a nightmare . . .

With an introduction by Irvine Welsh, Bret Easton Ellis's American Psycho is one of the most controversial and talked-about novels of all time. A multi-million-copy bestseller hailed as a modern classic, it is a violent black comedy about the darkest side of human nature.

American Psycho is a beautifully controlled, careful, important novel . . . The novelist's function is to keep a running tag on the progress of the culture; and he's done it brilliantly . . . A seminal book -- Fay Weldon * Washington Post *
Serious, clever and shatteringly effective * Sunday Times *
For its savagely coherent picture of a society lethally addicted to blandness, it should be judged by the highest standards -- John Walsh * Sunday Times *
That the book's contents are shocking is downright undeniable, but just as Bonfire of the Vanities exposed the corruption and greed engendered in eighties politics and high living, American Psycho examines the mindless preoccupations of the nineties preppy generation * Time Out *
Our killer nonchalantly takes his blood-splattered clothes to the dry cleaners and gives them attitude when they complain about the stains . . . You'd think at least one of these witnesses would get suspicious or complain, but they don't -- Bob Mack * Spin *
The first novel to come along in years that takes on deep and Dostoyevskian themes . . . Ellis is showing older authors where the hands have come to on the clock * Vanity Fair *

GOR006672737
American Psycho by Bret Easton Ellis
Bret Easton Ellis
Picador Classic
Used - Very Good
Paperback
Pan Macmillan
2015-01-01
416
1447277708
9781447277705
N/A
Book picture is for illustrative purposes only, actual binding, cover or edition may vary.
This is a used book - there is no escaping the fact it has been read by someone else and it will show signs of wear and previous use. Overall we expect it to be in very good condition, but if you are not entirely satisfied please get in touch with us.