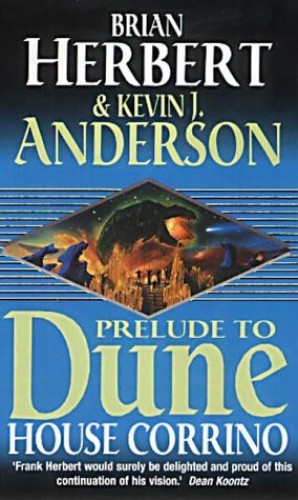 In Stock
$8.69
The third and final volume of Prelude to Dune brings this gripping series to its close, only a few years before the beginning of Frank Herbert's classic science fiction novel Dune.
Very Good Good
10 in stock

The blood feud between Duke Leto of Caladon and Baron Vladimir Harkonnen reaches its climax, as the emperor Shaddam - leader of House Corrino - is finally forced to curb the powerful Harkonnens or risk losing his own throne. Menawhile, Duke Leto's beautiful concubie, the Bene Gesserit temptress Jessica,- has conceived the boy who become Paul Atreides (the hero of Dune), defying the express orders of her superiors. The book culminates in a war - on Dune, on the oppressed planet Ix, in space - that will alter the balance of power for a generation.

House Atreides is a terrific prequel, but it's also a first-rate adventure on its own. Frank Herbert would surely be delighted and proud of this continuation of his vision. * Dean Koontz on House Atreides *
Those who long to return to the world of desert, spice and sandworms will be amply satisfied. * The Times on House Atreides *
Brian Herbert and Kevin J Anderson succeed in weaving their own intricate saga. Dune: House Atreides does its predecessors justice. * USA Today on House Atreides *
Succeeds admirably * The New York Times Book review on House Harkonnen *
House Harkonnen is compulsive reading. I certainly enjoyed meeting pardot Kynes and Liet, learning more about the Freman, as well as Gurney Halleck, Duncan Idaho and the Lady Jessica. Such vile villains...and such a fascinating description of splendid places. * Anne McCaffrey on House Harkonnen *

GOR001239561
House Corrino by Brian Herbert
Brian Herbert
Used - Very Good
Paperback
Hodder & Stoughton General Division
2002-04-18
608
0340751800
9780340751800
N/A
Book picture is for illustrative purposes only, actual binding, cover or edition may vary.
This is a used book - there is no escaping the fact it has been read by someone else and it will show signs of wear and previous use. Overall we expect it to be in very good condition, but if you are not entirely satisfied please get in touch with us.