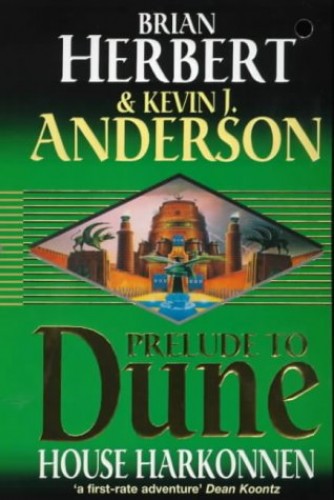 In Stock
$10.69
House Atreides began the thrilling saga of the blood feud between House Atreides and House Harkonnen. Now the story continues as more of the heroes of Dune take their places in the intrigues, the wars and the treacheries that will lead inevitably to the fall of a dynasty.
Very Good Good
8 in stock

Duke Leto Atreides is now the skilful and much-loved ruler of Caladan, served by loyal Duncan Idaho. To his court come Gurney Halleck, despised slave of the Harkonnens - and Jessica, the exquisite, perfectly trained concubine chosen by the Reverend Mothers of the Bene Gesserit to be the mother of Leto's daughter. Meanwhile, on Dune - planet Arrakis - House Harkonnen ruthlessly harvests the precious, mind-enhancing drug called spice. And Baron Vladimir is slowly being consumed by a loathesome disease. Rabban Harkonnen - House Atreides' most implacable enemy - prepares to take over his uncle's empire.

. . . Herbert and Anderson have met the challenge admirably . . . Even readers new to the saga will be able to follow it easily as the narrative weaves among the many interconnected tales. A terrific read in its own right. * Publishers Weekly *
House Atreides is a terrific prequel, but it's also a first-rate adventure on its own. Frank Herbert would surely be delighted and proud of this continuation of his vision. * Dean Koontz *
Those who long to return to the world of desert, spice and sandworms will be amply satisfied. * The Times *
Those who have nurtured a desire to return to Herbert Sr's world of deserts, spice and sandworms can happily immerse themselves in a more than worthy continuation of the saga * Publishing News *
Brian Herbert and Kevin J Anderson succeed in weaving their own intricate saga. Dune: House Atreides does its predecessors justice. * USA Today *
Congratulations to Herbert and Anderson for transporting us back to this richly excavated world...A spicy melange treat for both new and long-time fans of the series * Billy Dee Williams (of Star Wars, Lady Sings the B *
In writing a prequel to what is arguably the best science fiction novel of all time, Brian Herbert and Kevin J Anderson set themselves a monumental task. They succeed brilliantly. This cynical old critic found himself engrossed from page one, and eagerly looks forward to the rest of the series. Buy it now! * Dave Wolverton (NYT bestselling author) *
IN A WORD, SATISFYING: all Dune fans will want to investigate, newcomers will be tempted, and it should promote fresh interest in the magnificent original series. * Kirkus *

FRANK HERBERT, who created Dune, was born in 1920 and spent most of his early life in the Pacific Northwest of America. He was a professional photographer, journalist and occasional oyster-diver; he also had stints as a radio news commentator and jungle survival instructor. BRIAN HERBERT, his son, is a widely-published science fiction author in his own right. This is his first novel to call on his father's work: previously, he has created his own worlds, sometimes in collaboration. He has also written Dreamer of Dune, a comprehensive biography of his illustrious father. KEVIN J. ANDERSON is best known for his world-wide best-selling novels based on the universes of Star Wars and the X Files: he has been a Sunday Times number one bestseller. He is also the author of several more critically-acclaimed original novels. An expert on the US space programme, he worked at the Lawrence Livermore National Laboratory for ten years.

GOR001247730
House Harkonnen by Brian Herbert
Brian Herbert
Used - Very Good
Paperback
Hodder & Stoughton General Division
2001-03-15
640
0340751789
9780340751787
N/A
Book picture is for illustrative purposes only, actual binding, cover or edition may vary.
This is a used book - there is no escaping the fact it has been read by someone else and it will show signs of wear and previous use. Overall we expect it to be in very good condition, but if you are not entirely satisfied please get in touch with us.