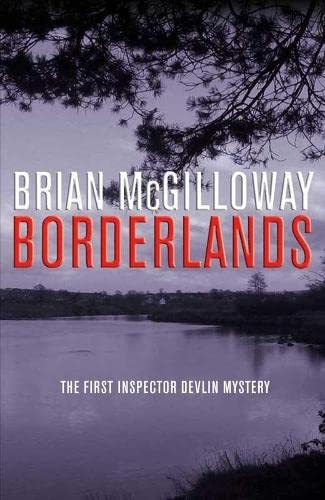 'Brian McGilloway's command of plot and assurance of language make it difficult to believe that Borderlands is his debut.' - The Times

The corpse of local teenager Angela Cashell is found on the Tyrone- Donegal border, between the North and South of Ireland, in an area known as the borderlands. Garda Inspector Benedict Devlin heads the investigation: the only clues are a gold ring placed on the girl's finger and an old photograph, left where she died.

Then another teenager is murdered, and things become further complicated when Devlin unearths a link between the recent killings and the disappearance of a prostitute twenty-five years earlier - a case in which he believes one of his own colleagues is implicated.

As a thickening snow storm blurs the border between North and South, Devlin finds the distinction between right and wrong, vengeance and justice, and even police-officer and criminal becoming equally unclear.

""Borderlands" has me, dare I say, green with envy. It's rare I'm jealous of a debut novel but I'm ferociously so of this stunning work. Devlin, the main character of this new series, is going to join the ranks of Rebus, Resnick, Davenport, and Scudder as one of the reference points of character series. Not only is the writing a sheer blast of dark lyricism but the plot is utterly compulsive. Dammit,"" I muttered, it can't be this good, it is . . . and better. This is not only a wondrous addition to the growing canon of Irish mystery writing, it's a terrific bonus to mystery writing as a whole." ---Ken Bruen, author of "Once Were Cops ""Brian McGilloway's command of plot and assurance of language make it dif?cult to believe that "Borderlands" is his debut." ---"The Times" (UK) "A mystery of labyrinthine complexity." ---"Sunday Telegraph" (UK) "McGilloway evocatively describes the landscape of the border area . . . and captures small-town rural Ireland. Ben Devlin is an appealing character . . . and the supporting cast are well drawn." ---"Times Literary Supplement" (UK) "Brian McGilloway is a name to keep in mind. He has written a taut, well-paced story with strong characters and an ingenious plot that seizes the reader's attention from page one and holds it to the last sentence." ---"Irish Independent ""McGilloway conveys a believable portrait of a real, troubled, and coping-as-best-they-can population in the new Ireland, with all its contradictions and complexities." ---"International Noir Fiction ""This is an impressive debut, the writing is tight, the plot is complex but well paced, the characters are well drawn...and the resolution was surprising."---"ReviewingTheEvidence.com ""A gripping thriller."---"The Irish News"

Brian McGilloway was born in Derry, Northern Ireland, in 1974, and teaches English at St Columb's College, Derry. He lives near the Irish borderlands with his wife and their four children. He is the author of many previous crime novels, including: Borderlands, Gallows Lane, Bleed A River Deep and The Rising.

GOR001243992
Borderlands by Brian McGilloway
Brian McGilloway
Used - Very Good
Hardback
Pan Macmillan
2007-04-06
243
0230020062
9780230020061
Short-listed for CWA New Blood Dagger 2007 (UK)
Book picture is for illustrative purposes only, actual binding, cover or edition may vary.
This is a used book - there is no escaping the fact it has been read by someone else and it will show signs of wear and previous use. Overall we expect it to be in very good condition, but if you are not entirely satisfied please get in touch with us.