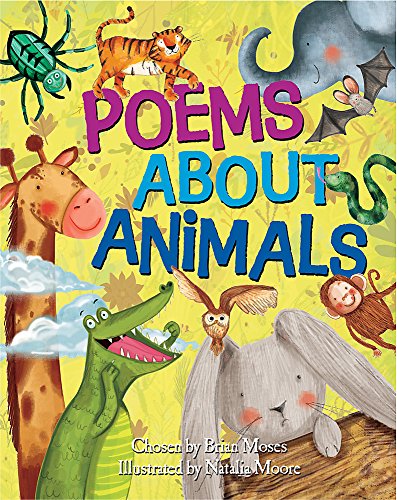 Poems About Animals
by Brian Moses

Poems About Animals by Brian Moses

A fantastically fun collection of poetry for young readers! Compiled by Brian Moses, this anthology contains a mix of light-hearted poems and more serious ones, poems that rhyme and those that don't. There are plenty of good 'read alouds', thumping choruses, and the sort of poems that children can use as models for their own writing.

Poetry is a key feature of the National Curriculum and these fantastic poems are perfectly suited for this. Suitable for KS1 or KS2 children to read alone or in groups.

Beautiful illustrations tell the story of each poem.

Poems include The Terrible Ten by James Carter; On My Way From School by Roger Stevens; Animal Riddles by Marian Swinger; My Dog by Joshua Seigal; Sad Rabbit by Eric Finney; A Bear in his Underwear by Brian Moses; Komodo Dragon by Graham Denton; I'm A Giraffe by Mike Jubb; Hungry Crocodile by Carol Rumble; If You Should Meet a Crocodile by Anon; How to Spot a Kangaroo by Robert Scotallero; Caterpillar by Christina Rosetti; Swish Swash by Bill Condon; Tiger by Alison Chisholm; Animal Farewells by Kate Snow;

Brian Moses lives in the village of Etchingham with his wife Anne, a loopy labrador called Honey and a collection of bad-tempered chickens.

GOR008678181
Poems About Animals by Brian Moses
Brian Moses
Poems About
Used - Very Good
Paperback
Hachette Children's Group
2017-01-26
32
1526303582
9781526303585
N/A
Book picture is for illustrative purposes only, actual binding, cover or edition may vary.
This is a used book - there is no escaping the fact it has been read by someone else and it will show signs of wear and previous use. Overall we expect it to be in very good condition, but if you are not entirely satisfied please get in touch with us.