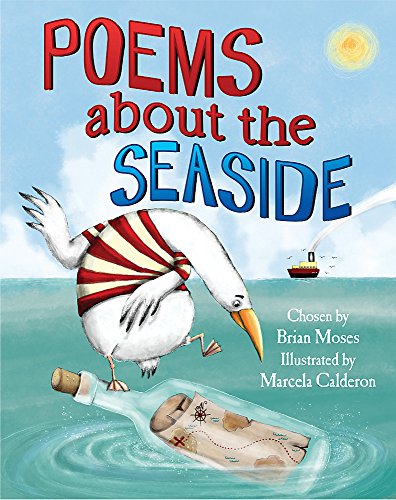 Poems About The Seaside
by Brian Moses

Used Price
$10.69
Free Shipping in the US
A fantastically fun collection of poetry for young readers!
Reviews:
Trustpilot
Very Good

Poems About The Seaside Summary

Poems About The Seaside by Brian Moses

This anthology of poems, compiled by Brian Moses, contains a mix of light-hearted poems and more serious ones, poems that rhyme and those that don't. There are plenty of good 'read alouds', thumping choruses, and the sort of poems that children can use as models for their own writing.

Poems include: Are We Nearly There Yet? by Brian Moses; Beach Counting by Tony Mitton; I Do Like to be Beside the Seaside by John A. Glover-Kind; The Seagull's Song by June Crebbin; Seagulls With Everything by Brian Moses; Seaside Sounds by John Foster: A Single Wave by Ian Souter; The 7th Wave by Jan Dean; There's An Ocean in this Seashell by Graham Denton; Shells by Debra Bertulis; Skimming Stones on the Sea by Jane Clarke; Treasure Chest Mystery by Kate Williams; Playtime Pirate (Action Rhyme) by Tony Mitton; Letters in Bottles by Clare Bevan; The Bucket by James Carter; Rock Pool by Matt Goodfellow; The Friendly Octopus by Mike Jubb; Crab by Irene Assiba D'Almeida; Man on the Beach by Joshua Seigal.

Customer Reviews - Poems About The Seaside

Brian Moses lives in the village of Etchingham with his wife Anne, a loopy labrador called Honey and a collection of bad-tempered chickens.

GOR009207378
Poems About The Seaside by Brian Moses
Brian Moses
Poems About
Used - Very Good
Paperback
Hachette Children's Group
2017-04-26
32
075029177X
9780750291774
N/A
Book picture is for illustrative purposes only, actual binding, cover or edition may vary.
This is a used book - there is no escaping the fact it has been read by someone else and it will show signs of wear and previous use. Overall we expect it to be in very good condition, but if you are not entirely satisfied please get in touch with us.