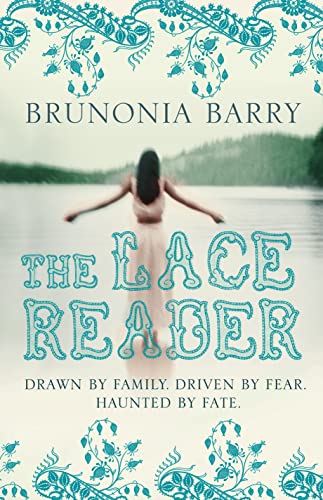 The Lace Reader
by Brunonia Barry

Drawn by family. Driven by fear. Haunted by fate.

The Lace Reader by Brunonia Barry

Drawn by family. Driven by fear. Haunted by fate.

Would knowing the future be a gift or a burden? Or even a curse...?

The Whitney women of Salem, Massachusetts are renowned for reading the future in the patterns of lace. But the future doesn't always bring good news - as Towner Whitney knows all too well. When she was just fifteen her gift sent her whole world crashing to pieces. She predicted - and then witnessed - something so horrific that she vowed never to read lace again, and fled her home and family for good. Salem is a place of ghosts for Towner, and she swore she would never return.

Yet family is a powerful tie and fifteen years later, Towner finds herself back in Salem. Her beloved great-aunt Eva has suddenly disappeared - and when you've lived a life like Eva's, that could mean real trouble. But Salem is wreathed in sickly shadows and whispered half-memories. It's fast becoming clear that the ghosts of Towner's fractured past have not been brought fully into the light. And with them comes the threat of terrifying new disaster.

A literary page-turner with depth, narrative power and a story that novels like `The Thirteenth Tale' can only dream of, `The Lace Reader' is a bewitching and tightly plotted read.

'An unusual and beguiling literary thriller about a fascinating family of women. The setting of the tight-knit Salem community, still haunted by a heritage of witchcraft and persecution, is marvellously evoked. Enchanting, whimsical and menacing by turns and with a brightly drawn oddball cast it's an exhilarating and ultimately uplifting read.' Rachel Hore, 'The Memory Garden'

'A gorgeously written literary novel that's also a doozy of a thriller, capped with a jaw-dropping denouement that will leave even the most careful reader gasping ... a major feat' Chicago Tribune

'[A] richly imagined saga of passion, suspense and magic' Time

'Blithe and creepy in equal measure. [Barry] captures [Salem] evocatively and often wittily. What is real in "The Lace Reader"? What is not? ... There are clues planted everywhere ...' New York Times

'A spine-tingler ... "The Lace Reader" is tailor-made for a boisterous night at the book club' People

Born and raised in Massachusetts, Brunonia Barry studied literature and creative writing at Green Mountain College in Vermont and at the University of New Hampshire. After nearly a decade in Hollywood, Barry returned to Massachusetts where, along with her husband, she founded an innovative company that creates award-winning word, visual and logic puzzles. Happily married, Barry lives with her husband and her 12-year old Golden Retriever named Byzantium.

GOR001244644
The Lace Reader by Brunonia Barry
Brunonia Barry
Used - Very Good
Hardback
HarperCollins Publishers
2009-04-02
400
0007287089
9780007287086
N/A
Book picture is for illustrative purposes only, actual binding, cover or edition may vary.
This is a used book - there is no escaping the fact it has been read by someone else and it will show signs of wear and previous use. Overall we expect it to be in very good condition, but if you are not entirely satisfied please get in touch with us.