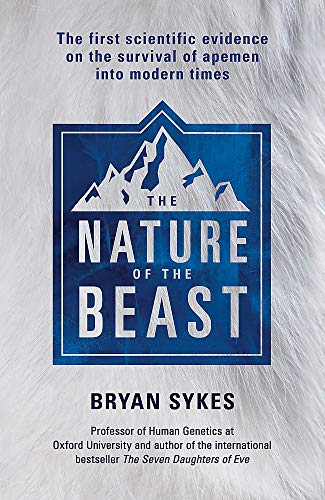 The Nature of the Beast
by Bryan Sykes

Used Price
$26.99
Free Shipping in the US
There is something out there. But what?
Reviews:
Trustpilot
Very Good

The Nature of the Beast Summary

The Nature of the Beast: The first genetic evidence on the survival of apemen, yeti, bigfoot and other mysterious creatures into modern times by Bryan Sykes

Almost, but not quite human, the yeti and its counterparts from wild regions of the world, still exert a powerful atavistic influence on us. Is the yeti just a phantasm of our imagination, or is it a real creature? A survivor from our own savage ancestry? This is the mystery that Bryan Sykes set out to unlock.

Three hair samples from the remote Himalayan kingdom of Bhutan are the cause of the investigation. The hair samples were from the miogi, the Bhutanese yeti, that legendary creature of the high snows that has haunted the imagination of travellers for centuries. Professor Sykes was asked to identify the hairs using DNA analysis. The miogi hairs did not surrender their secrets easily, but eventually two were identified as known species of bear. The third remained a mystery.

Ten years later two scientific developments caused the migoi to enter Professor Sykes' thoughts again. The first, a purely technical improvement, meant that it was now possible to get a very good DNA signal from a single hair. The second development came from the surprising conclusion of an article published in 2010. This paper contained the details of the DNA sequence from another human species, Homo neanderthalensis, the Neanderthals, widely thought to be extinct. One of the many theories to account for the yeti legend is that there were small groups of Neanderthals that had managed to survive until recent times, or maybe even until the present day. If so, would it be possible to detect recent interbreeding between our own species and Neanderthals in the genomes of indigenous people living in remote regions. Locations where the yeti legends are strongest and the sightings most numerous?

Professor Sykes set a goal to locate and analyse as many hair samples as possible, with links the yeti. In doing so Professor Sykes found himself entering a strange world of mystery and sensationalism, fraud and obsession and even the supernatural. Protected by the ruthless vigour of genetic analysis he was able to listen to the stories of the yeti without having to form an opinion. The only opinion that mattered was the DNA.

Two years on the project is almost complete, and there have been some surprising and significant discoveries. The yeti remains an enigma. There is something out there. But what?

Customer Reviews - The Nature of the Beast

The Nature of the Beast Reviews

An intriguing book...It is this humanity, this cheerful readiness to travel out into the deepest pine forests of Washington State to interview a twitchy hunter in a Chewbacca T-shirt about something he thought he heard groaning in the woods, that makes The Nature of the Beast worth reading. If science does ever acknowledge the yeti, it will be thanks to somebody very much like Sykes. * The Times *

Bryan Sykes is a Professor of Human Genetics at the University of Oxford and a Fellow of Wolfson College.

He has been involved in a number of high-profile cases dealing with ancient DNA, including those of 'Otzi the Iceman', a well preserved natural mummy of a man who lived around 3,300 BC and 'Cheddar Man', the remains of a man found in Cheddar Gorge, from approximately 7150 BC, it is Britain's oldest complete human skeleton.

Professor Sykes in best known outside the community of geneticists for his bestselling books on the investigation of human history and pre-history through studies of mitochondrial DNA.

GOR010090750
The Nature of the Beast: The first genetic evidence on the survival of apemen, yeti, bigfoot and other mysterious creatures into modern times by Bryan Sykes
Bryan Sykes
Used - Very Good
Paperback
Hodder & Stoughton
2015-04-09
336
1444791265
9781444791266
N/A
Book picture is for illustrative purposes only, actual binding, cover or edition may vary.
This is a used book - there is no escaping the fact it has been read by someone else and it will show signs of wear and previous use. Overall we expect it to be in very good condition, but if you are not entirely satisfied please get in touch with us.