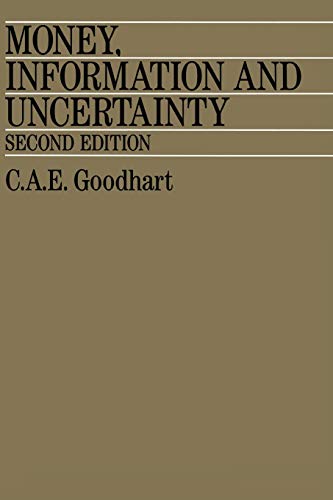 Used Price
$38.99
Free Shipping in the US
The book provides a comprehensive survey of monetary economics, with the first nine chapters primarily concerned with micro issues, such as the role of, and demand for, money, the role and functions of banks and of the Central Bank;
Reviews:
Trustpilot
Very Good Good

This is a completely revised edition of the well-known monetary textbook. The book discusses the latest analytical developments in monetary economic theory in a comprehensible and practical policy- orientated form for graduates and undergraduates specialising in monetary economics. The book provides a comprehensive survey of monetary economics, with the first nine chapters primarily concerned with micro issues, such as the role of, and demand for, money, the role and functions of banks and of the Central Bank; and the final nine chapters covering macro-economic issues, such as the transmission mechanism of monetary policy and international monetary problems.

C A E GOODHART was appointed to the newly established Norman Sosnow Chair of Banking and Finance at the London School of Economics in September 1985. For the previous seventeen years he served as a monetary economist at the Bank of England, becoming a Chief Adviser in 1980. He is a graduate of Cambridge (BA, 1960) and Harvard (PhD, 1963). After returning from Harvard to teach at Cambridge, where he was a Fellow of Trinity College (1963-5), he became an adviser in the Department of Economic Affairs for a brief period (1965-6), before returning to academic life as a Lecturer in Economics at the London School of Economics (1966-8), from where he joined the Bank of England.

Preface to the Second Edition, 1989.- Preface to the First Edition, 1975 .- Acknowledgments.- PART 1: THE NATURE OF MARKETS.- Summary Market Structure Determination of the Size of the Spread Price Adjustments Market Existence: Success or Failure? Money and Markets: What is the Best Approach?.- PART 2: THE ROLE OF MONEY Summary Certainty and Uncertainty Money, Information and Markets What Makes Currency Serve as Money? Bank Deposits, Cheque Payments and the Definition of Money Alternative Currencies .- PART 3: MICRO-ECONOMIC FOUNDATIONS OF THE DEMAND FOR MONEY Summary The Transactions Demand for Money Asset Price Uncertainty and the Speculative Demand for Money Buffer-stock Models of Money Holding.- PART 4: MACRO-ECONOMIC ANALYSIS OF THE DEMAND FOR MONEY Summary The Transition from Micro to Macro-studies of the Demand for Money The Progressive Collapse of Stability in the Demand-for-Money Function.- PART 5: THE PRINCIPLES OF INTERMEDIATION Summary The Role of the Intermediary 1 The Role of the Intermediary 2 Banks and OFIs: Differences and Similarities.- PART 6: CONTROLLING THE SUPPLY OF MONEY: A PROBLEM FOR THE AUTHORITIES? Summary Multiplier Finance and Open-market Operations Competition with the Private Sector Complications and Conclusions.- PART 7: CREDIT RATIONING Summary Credit Control Disequilibrium Rationing Equilibrium Rationing PART 8: WHY DO BANKS NEED A CENTRAL BANK? Summary The Central Bank as Organiser of the 'Club' of Commercial Banks Banks' Twin Functions in Providing Both Payments and Portfolio Management Services Bank Portfolios and Central Bank Support.- PART 9: FINANCIAL REGULATION Summary The General Theoretical Critique of Regulation The Economic Argument for Regulation.- PART 10: THE DETERMINATION OF INTEREST RATES Summary Practical Issues Theory The Demand for Money and the Demand for Credit Appendix: Monetary Base Control: The Examples of Switzerland, and of the USA in 1979-82.- PART 11: THE TERM STRUCTURE OF INTEREST RATES Summary The Theory of the Term Structure Empirical Studies of the Term Structure of Interest Rates Rational Expectations and the Term Structure PART 12: THE TRANSMISSION MECHANISM OF MONETARY POLICY Summary The Keynesian (IS/LM) Framework The Monetarist Counter-offensive Buffer-stock Money Wealth Effects.- PART 13: THE EFFECTS OF NOMINAL MONETARY CHANGES ON OUTPUT, EMPLOYMENT AND INFLATION Summary Uncertainty, Unemployment and Price Expectations Rational Expectations and Policy Impotence Appendix: UK Indexed Gilts: A Case Study of Financial Indexation.- PART 14: MONETARY POLICY 1: THE USE OF POLICY INSTRUMENTS IN AN UNCERTAIN WORLD Summary Objectives and Instruments Policy Under Uncertainty 1: Random Disturbances Policy Under Uncertainty 2: When the Structure of the System is Not Known.- PART 15: MONETARY POLICY 2: RULES VERSUS DISCRETION Summary The Historical Record, 1973-9 Rules versus Discretion The Historical Record, 1979-87 Whither Now?.- PART 16: THE REGIONAL ADJUSTMENT PROCESS Summary Financing Current Account Imbalances: The Capital Account Adjustment to a Current Account Imbalance Appendix: A Framework for the Analysis of Inter-regional Adjustment .- PART 17: INTERNATIONAL MONETARY RELATIONS 1: EXCHANGE RATE REGIMES Summary Optimal Currency Areas Monetary Relationships Between Currency Areas.- PART 18: INTERNATIONAL MONETARY RELATIONS 2: THE TURBULENT FLOAT Summary The Experience of Floating Exchange Rates Since 1973 Why Were Flexible Rates so Unstable? Attempts to Establish a More Stable Regime Bibliography.- Index.

GOR001876231
Money, Information and Uncertainty by C.A.E. Goodhart
C.A.E. Goodhart
Used - Very Good
Paperback
Palgrave Macmillan
1989-05-20
512
0333474023
9780333474020
N/A
Book picture is for illustrative purposes only, actual binding, cover or edition may vary.
This is a used book - there is no escaping the fact it has been read by someone else and it will show signs of wear and previous use. Overall we expect it to be in very good condition, but if you are not entirely satisfied please get in touch with us.