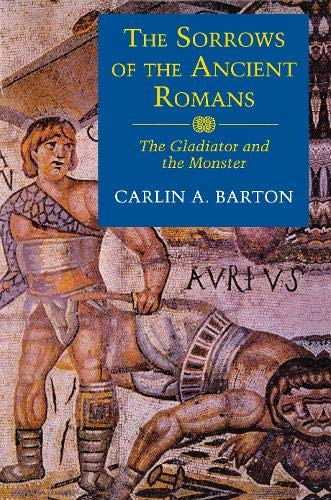 The Sorrows of the Ancient Romans
by Carlin A. Barton

Used Price
$12.99
Free Shipping in the US
This inquiry into the collective psychology of the ancient Romans speaks not about military conquest or politics, but about extremes in despair, desire and envy. It probes the tensions of a society struggling at the limits of human endurance.
Reviews:
Trustpilot
Very Good

The Sorrows of the Ancient Romans Summary

The Sorrows of the Ancient Romans: The Gladiator and the Monster by Carlin A. Barton

This inquiry into the collective psychology of the ancient Romans speaks not about military conquest, sober law, and practical politics but about extremes of despair, desire and envy. Early in the work, Carlin Barton describes the Romans as seeming to be "surpassing strange, exercising the same fascination as a Siberian tiger or a Great White shark", but by the end of the book she has made us uncomfortably familiar with a society struggling at or beyond the limits of human endurance. To probe the tensions of the Roman world in the period from the first century BC through the first two centuries AD, Barton picks two images: the gladiator and the "monster". What was it that the Romans saw in the despised gladiator that so deeply affected them? What motivated men and women of the free and privileged classes to identify with and even assume the role of the gladiator both publicly and privately? After looking at these issues, Barton analyzes the Roman obsession with the dwarf and the giant, the hunchback and the "living skeleton", a fascination that reflected, among their social disturbances, a deeply troubled relationship between hierarchy and equality. While trained as a historian, Barton has welcomed the aid of psychologists, anthropologists, sociologists, philosophers and literary theorists in the attempt to articulate the darkest riddles of the Roman psyche.

Customer Reviews - The Sorrows of the Ancient Romans

The Sorrows of the Ancient Romans Reviews

"Barton amasses an impressive collection of ancient evidence and treats it to an even more impressive interpretation, reinforced by references to modern psychological and anthropological studies. The thesis is enriched and underscored by countless examples from contemporary films, plays, and literature. . . . This provocative volume deserves a wide audience."---Richard E. Mitchell, American Historical Review
"Surely the most erudite treatment of Latin sadomasochism around and a model of literary-history digging."---Scott L. Malcomson, The Voice Literary Supplement
"The main achievement of the author is a wealth of documentation of some rather odd-looking aspects of Roman culture. . . . [Barton] is especially stimulating on the subject of the gaze in the Roman context, on the dynamics of watching."---James Davidson, Journal of Roman Studies

About Carlin A. Barton

Carlin A. Barton is Associate Professor of History at the University of Massachusetts, Amherst.

CIN000407992
The Sorrows of the Ancient Romans: The Gladiator and the Monster by Carlin A. Barton
Carlin A. Barton
Used - Very Good
Hardback
Princeton University Press
1993-01-03
224
069105696X
9780691056968
N/A
Book picture is for illustrative purposes only, actual binding, cover or edition may vary.
This is a used book - there is no escaping the fact it has been read by someone else and it will show signs of wear and previous use. Overall we expect it to be in very good condition, but if you are not entirely satisfied please get in touch with us.